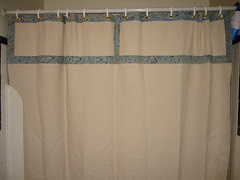 It's a good thing my neighbours aren't home... I didn't get around to banging in the grommets until 11pm. (Oops!) The little gizmo to cut the holes is a bust... I used it to mark the hole size, and then used scissors. However, the grommets themselves, and the grommet tool worked well. I wasn't given enough backing washers, though. Instead of 24, I got 19... unless you want to count the one that was too small, then I had 20. I'll see if Amazon is willing to send me out the extra 5. They may want to do the whole exchange thing, but I've already used 13 of the washers. (12 on the curtain, and one first on some scrap fabric to test.) I figured I had waited long enough.

Here's a close-up of the grommets: 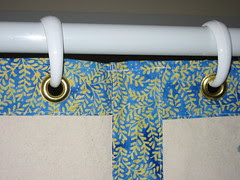 The back side looks pretty decent too... except for the one I got stuck on the grommet tool, and had to pry off. ;)

No snowflakes tonight... I need to finish off grandma S's toe socks before I go home, so I'm dedicating my time from now until I'm done to the toe socks. However, if I finish a toe sock in an evening, I'll let myself work on another project too. ;) Tonight I did one toe sock, and two rows of Weasley. Plus I baked pita bread, and installed the grommets. (So much for going to bed early tonight.)

I'll let you know tomorrow how the curtain works.

Nice curtains but I think they are a bit pale actually; colaours might have been fun.

Thanks. :) The main fabric only came one colour, and I didn't feel like dying it.