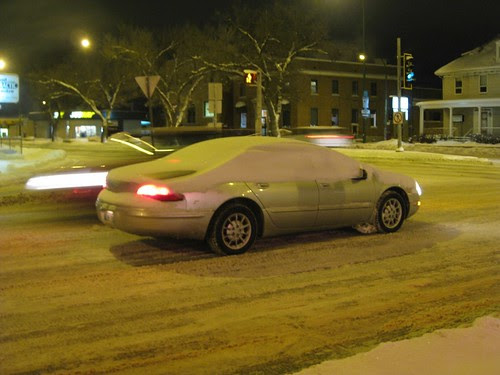 Suggestion: you might want to brush off more than just the front windshield and driver's door windows... with roads the way they are, being able to see more than 90 degrees will help you avoid someone who is about to hit you from the right or behind.

I'm glad I'm home now, for more reasons than one!
Posted by noricum at 9:27 PM 8 comments: 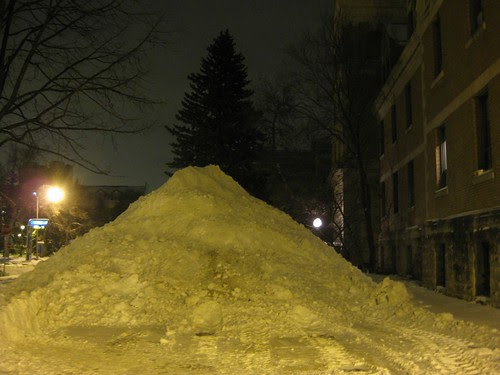 Really? REALLY?!?!! It's only been snowing since Thursday, and the snow piles are *already* a storey tall. Sheesh.

The rivers are still high. I heard on the news this morning about flooding in some areas, and the Amphibex being sent out to break up ice jams. Next spring could be *bad*.
Posted by noricum at 10:29 PM 2 comments: 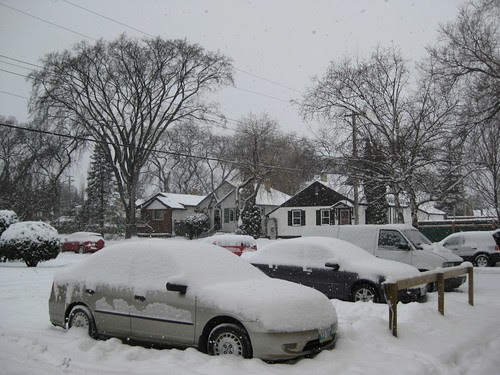 Attendance at the art show was pitiful... probably due to weather and the number of other shows on this weekend. 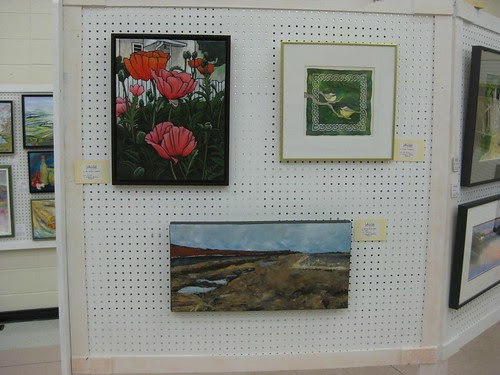 (Since pretty much everyone missed seeing it in person.)
Posted by noricum at 10:20 PM 4 comments:

For craft images here
Posted by noricum at 10:59 PM No comments: 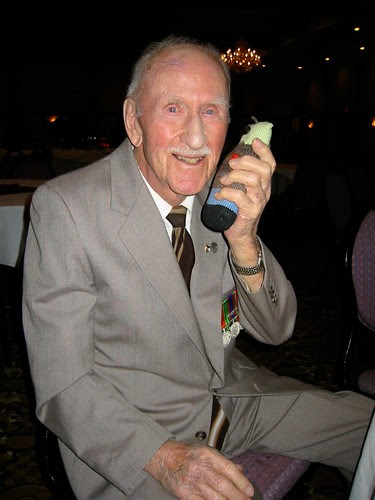 Rest in peace, neighbour. You were a wonderful person, and I'm glad I knew you.
Posted by noricum at 1:10 PM 4 comments:

Oh, The Weather Outside Is Frightful

And the sidewalks haven't been plowed yet. Since it would take me a ridiculous amount of time to slog down to Henderson with the way the sidewalks were, I decided to wait for the 20 (since the 60 runs often enough that I *should* have been fine). The 20 was only about five minutes late... but then I ended up waiting *25* minutes for the 60!!! According to the schedule, *five* buses should have gone past in that time. Even if they can't manage to be on time, it would be nice if they could at least maintain spacing. *sigh* With additional time lost en route, I'll be making up 26 minutes sometime.

I don't think any students missed me... anyone who would have come see me for help would also be contending with the buses, and I have yet to have a single customer.

I wonder how many of my students will be showing up for class this afternoon?

PS: It will be nice and toasty at the art show tonight, so if you're looking for something to do... ;)
Posted by noricum at 10:24 AM No comments:

Since Thursday was a holiday, I was a bit ahead on my dishes this weekend... so I decided to dirty a bunch. Presenting six mini lasagnas ready to be frozen, then popped into the oven on a week night: 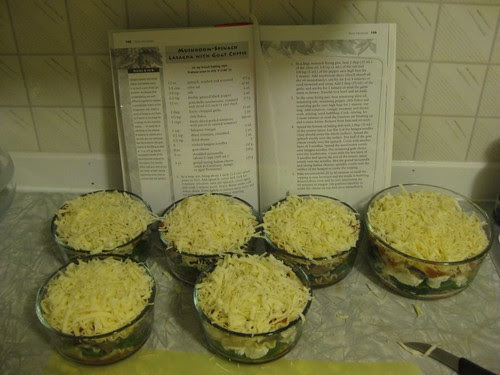 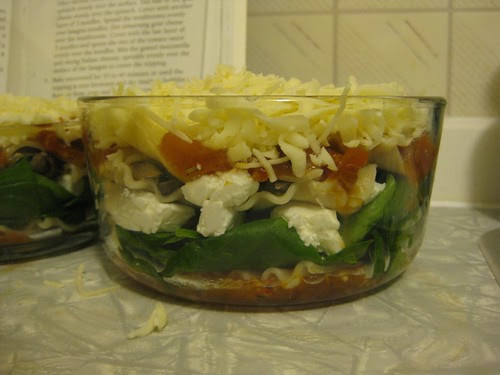 I suppose I should go wash all those dishes I created now... *sigh*
Posted by noricum at 8:34 PM 8 comments:

*cough* *cough*... Note to self: although it doesn't smell, pay attention to the "work in a well ventilated area" warning! (I meant to have the windows open, but forgot. I've got a cross-breeze going now, and am in a different room. Opening the windows at +1C is a bit nippy.)

I finally got around to gluing the upper wheel on my Windwheel spinning wheel. I meant to do this repair outside on a nice sunny day, but somehow that never happened this summer. So, kitchen it is. For those who are interested, I took photos of the steps (except the actual gluing... I needed to focus then, to get the glue *only* where I wanted it): 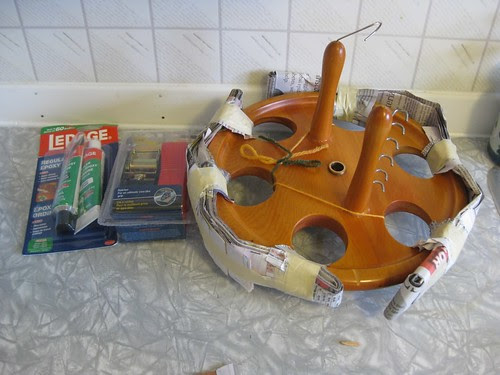 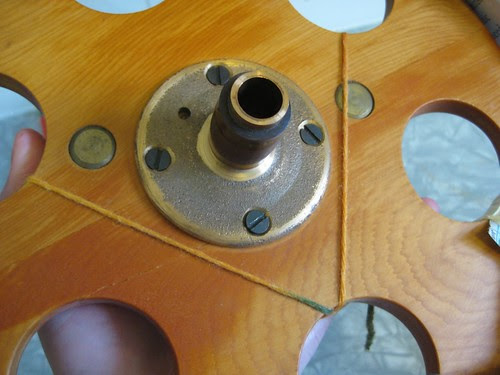 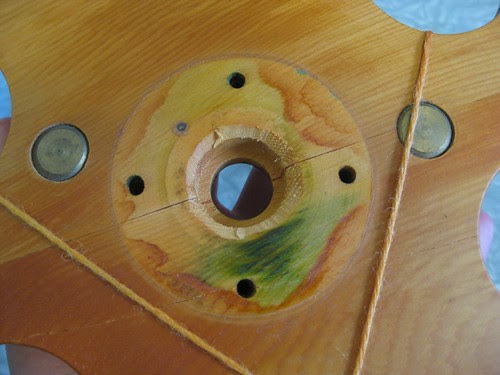 Here you can see the crack better: 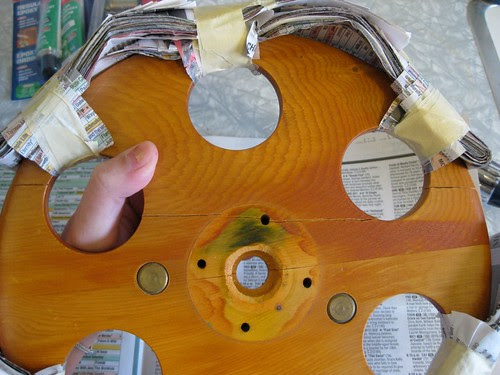 It turns out it wasn't *completely* separated... there were strands joining the two parts. This made gluing more challenging.

These clamps were to go through the holes: 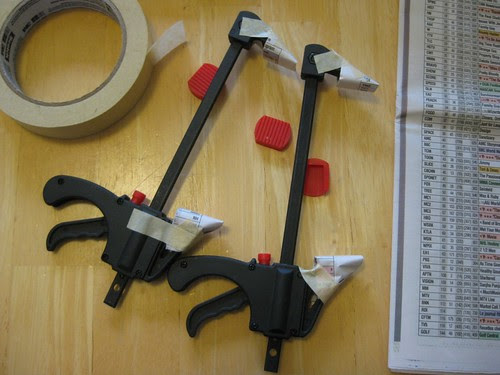 It turns out it's difficult to get clamps that are small enough to fit in the holes, while being long enough to span the holes. This pair *just* fit the bill once I removed the pads... but then there were no pads. So I added a few layers of newspaper to minimize marking. 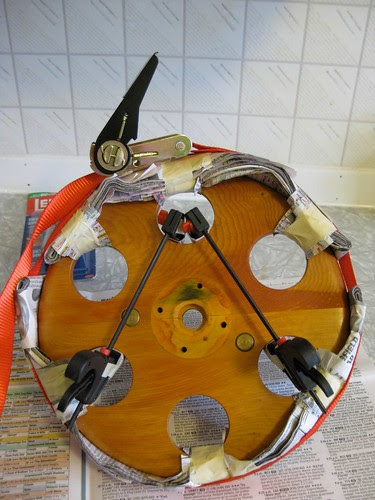 The newspaper around the wheel is for two reasons: protect the wood from the ratchet, and to keep the strap from being permanently glued to the wheel. ;) 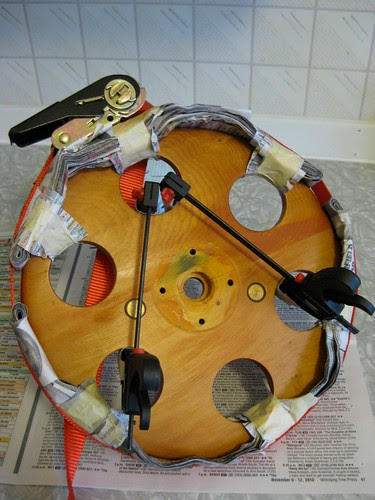 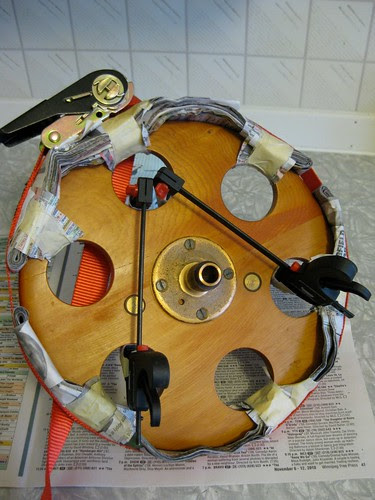 This is what caused the pain I experienced Saturday, Sunday, and then sore backs of thighs for several more days: 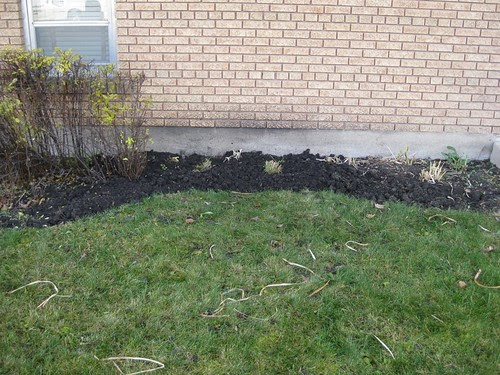 Not very impressive, is it? Well, it was basically the first time I had gardened all year, and wet clay is... difficult. Here's an idea of how it looked before: 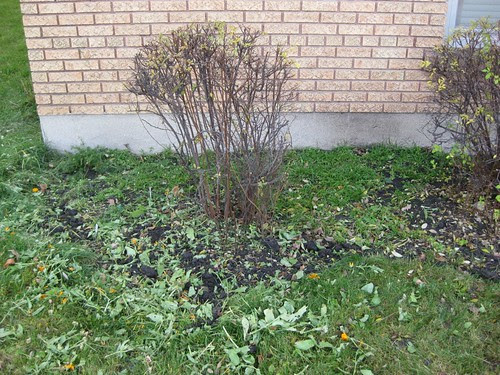 All the green shredded stuff is from my caretaker's idea of gardening... before I went out, he went at the garden with the weed whacker. (I don't have high hopes for this garden after I leave.) I have pulled the annuals from this second area, but the rest will have to wait until spring now. (It's been snowing & raining since last night. Nothing has stuck, but the ground is even wetter now, and, being mid-November, there's no hope of it being workable before spring.)
Posted by noricum at 4:29 PM No comments:

I had a strange dream last night. It was my birthday, and I was having a large number of people coming for cake, which was being served in a gymnasium. The cake was to be a layer cake, but it wasn't ready when people started arriving. The cake and filling were both made, but the cake had to be sliced and the layers assembled. My dad decided to slice the cake layers, but sliced four layers instead of five, and did a really crooked job of it too. This was annoying but okay... but *then* someone cut up the cake into tiny irregular pieces. This meant that it was going to be difficult and time consuming to assemble the layers... I'd have to make sure the pieces were all in place, then add the filling, then assemble the pieces of the next layer. As I was doing this, people started helping themselves to cake, which upset me further, since (a) I no longer had all the pieces of the puzzle, and (b) there wouldn't be enough of the final cake for everyone if some of it had already been eaten before the party started. But whenever I chased people down to get the pieces back, other people would take the opportunity to serve themselves cake. Finally I smooshed the remaining cake into a bunny outline (why a bunny when I had been making a rectangle before? I don't know!), and put on the icing. The final smooshed result was inedible, and so I didn't get any cake.

I woke up still feeling upset. (Don't you hate that? You know it's irrational, yet you can't shake the feeling.)

When I got in to work, H had brought in leftover birthday cake, and I got a slice. It was even a layer cake! What a bizarre coincidence!

That slice of cake *really* improved my morning. Thanks H! Happy birthday again!
Posted by noricum at 10:58 AM 2 comments:

When I was stumped, a co-worker found the answer:

According to the JLS:

Fascinating! It's fun learning something new. :)
Posted by noricum at 10:36 AM 2 comments:

It was a nice day today, it hasn't rained in a while (well, not *too* recently), and my weekend wasn't as crazy busy as they have been... so I decided to go out and prepare the garden for winter. (Dig the lawn & weeds that were reestablishing themselves in the bed, pull the annuals, and trim the perennials.)

The soil was *still* mud. The first stuff I dug wasn't too bad, but, as I worked my way back towards the lawn, I had to dig the stuff I had been standing on... pure airless clay. A consistency that would probably be nice for working on a wheel. I did get a bunch done, but not nearly as much as I had planned, and not nearly as much as I would have been able to had I been able to dig the peat moss in at some point this summer. *sigh*

Apparently, this is what I get for not gardening all summer, and then try to dig gumbo for several hours.

I think I'll be leaving the dishes I had intended to tackle tonight until tomorrow. (Thankfully I did get some done Thursday night, so the pile isn't as scary as it could be.)
Posted by noricum at 6:28 PM No comments:

I saw this comment at another blog (Note: make sure you read after point #1.):

To rock another post about being gay and what the bible teaches:

1) When someone tries to defend the homosexual lifestyle, for example, I simply remind them that Leviticus 18:22 clearly states it to be an abomination. End of debate.

2) I would like to sell my daughter into slavery, as sanctioned in Exodus 21:7. In this day and age, what do you think would be a fair price for her?

3) I know that I am allowed no contact with a woman while she is in her period of menstrual uncleanliness – Lev.15:19- 24. The problem is, how do I tell? I have tried asking, but most women take offense.

4) I have a neighbor who insists on working on the Sabbath. Exodus 35:2 clearly states he should be put to death. Am I morally obligated to kill him myself?

5) Most of my male friends get their hair trimmed, including the hair around their temples, even though this is expressly forbidden by Lev. 19:27. How should they die?

6) My uncle has a farm. He violates Lev. 19:19 by planting two different crops in the same field, as does his wife by wearing garments made of two different kinds of thread (cotton/polyester blend). He also tends to curse and blaspheme a lot. Is it really necessary that we go to all the trouble of getting the whole town together to stone them? – Lev.24:10-16. Couldn’t we just burn them to death at a private family affair like we do with people who sleep with their in-laws? (Lev. 20:14)

I know you have studied these things extensively, so I am confident you can help. Thank you again for reminding us that God’s word is eternal and unchanging

I found a lovely craft blog via a Flickr photo, and thought I'd share a link. She's planning on having some blog contests in November, if you need other incentive to click over. ;)
Posted by noricum at 10:00 AM 4 comments:

Whoops... I misunderstood the bus schedule (and apparently had my logic circuits turned off), and ended up at knit-night an hour early. I was *really* confused when I first got here, but caught on when I looked at my watch. (For only the nth time since getting off the bus.) Doh!

Well, I was able to do a bit of work... but the rest will have to wait until I'm home (dishes, evil dishes) or back at school (access to Access). Or until someone e-mails me a question. Hmmm... just thought of something else I can do. TTFN!
Posted by noricum at 6:26 PM No comments:

I'm showing again this year in our upcoming group show: 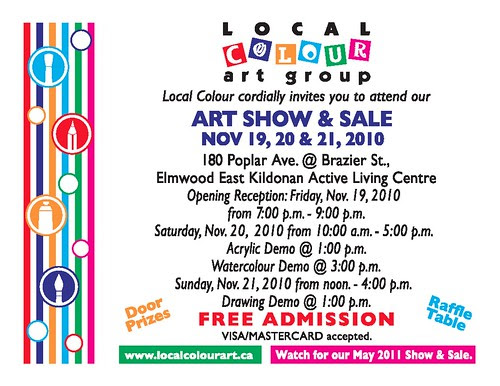 Also, my mom is displaying at Art Expo this weekend, so I encourage you to go down and buy lots! ;)
Posted by noricum at 3:01 PM 2 comments: