Hello, I thought I'd put up a brief post to say I'm still alive. ;) I'm in Toronto right now. I was going to post when I got back from the lake (Friday morning), but it turns out my computer pined away without me, and refused to boot up. :( Looks like it's corrupted files causing the problem, but needless to say, it didn't get fixed during my 22 hours in Winnipeg. *sigh*

I'll be back and posting for real on Tuesday or Wednesday. (Assuming I have a computer to post with, that is...)

Well, time for bed: tomorrow is my cousin's wedding.
Posted by noricum at 9:31 PM 9 comments:

Awwww! This lady makes seriously cute kitties! (Click through to check out her flickr stream.) Oooo! I had to search for it, but she has an Etsy shop too!

Ugh... now I found what looks like a dead bedbug in my suitcase. Was it from when my parents borrowed it? Or is there bedbugs in the storage unit?

I've had enough bugs for today, please. (The benign one that is obviously in from outside, but I found in my kitchen sink, doesn't bother me, though.)
Posted by noricum at 12:51 PM 2 comments:

I saw something that looked like a clothes moth this morning when I got in the shower. (Why does this have to happen the day I'm leaving for 3 weeks?!?)

Are my woolens infested? Or was this just a random bug that came in from outside? If it isn't random, is something in my kitchen infested, or is it my yarn and/or sweaters? *shudder*
Posted by noricum at 12:34 PM No comments:

I found a source for the wonderful Maggie spindles like I have! I'm so excited, I just have to share it. ;) If you want a spindle that *loves* spinning, and is gorgeous in it's simplicity, click here to go to the Carolina Homespun page for them. :) (Mine is the bottom whorl one.) Everyone who tries my spindle, loves it, but I never know where to send them. (When I bought mine, I was told that the maker was thinking about stopping production, and I wasn't able to find anything on the web at that time.)

Update: I also found the homepage for Magpie Woodworks.
Posted by noricum at 4:09 PM 2 comments:

People who think doorbells are mounted on their steering wheel.

The Greyhound website, which says you can save money by buying in advance, then charges you $4 for the privilege... but you don't actually save anything on the fare. (According to the guy at the bus depot when I picked up my ticket. Not to Flin Flon, at least.)
Posted by noricum at 11:47 AM 2 comments:

Ugh... PETA has stooped pretty low with this. I'm speechless.
Posted by noricum at 11:08 AM 2 comments:

I hate August 1st. Well, not the date itself, but there were several things that started then that I hate.

For example, the post office where my package is sitting started closing earlier then. However, my parcel slip didn't reflect the updated hours. So, last night, instead of getting off the bus right by my apartment (after coming home from the knitting group... it was 10 pm, and I had been out of the house since 8 am), I stayed on for two more stops, then walked a few blocks to the post office. Only to find that as of August 1, they closed at 9 8 pm instead of 11. Grrr. I don't have my package yet, and I had to walk several blocks carrying my school bag and knitting. *sigh*

The second thing that's ticking me off is that Greyhound used to allow two bags for free, but now you're only allowed one. Why couldn't they have waited until September 1, when I'd be back from the lake?!? How am I supposed to fit three weeks worth of clothing, projects, a bit of food, my sleeping bag, a cot, a mattress pad, and everything else into *one* bag?!? I was already puzzling how to fit it into *two*. Grrr.
Posted by noricum at 10:22 AM No comments: 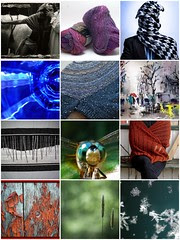 I found this new version of the Flickr Meme at Crochet All Day.

How to Play:
Type your answer to each of the questions above into Flickr search.
Using only the first page, choose an image.
Copy and paste each of the URL’s into the mosaic maker over at FDs Image Maker.

A friend of mine is looking for knitting designers for a book or three! How cool! Click here if you're interested.
Posted by noricum at 1:53 PM No comments:

Posted by noricum at 1:34 PM No comments:

Lovely! I think now I understand an advantage of oils over acrylics... achieving the kind of colour blending used here would be very difficult with acrylics. I think I may need to give oils another chance, but try using them as oils, rather than acrylics. ;) (Not that I plan on giving up acrylics... the two mediums have advantages, but in different areas.) 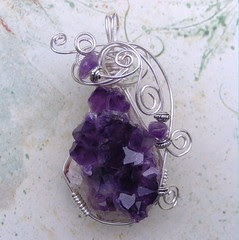 Posted by noricum at 1:30 PM No comments: 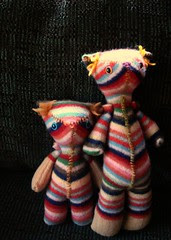 Adorable! I love the little tufts of fur by their ears. :)

Posted by noricum at 1:28 PM No comments: 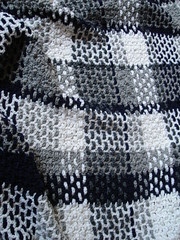 I love the pattern! (Both the stitch pattern, and striping/plaid.) If I were to make it, I'd use blues, though, of course. ;)

Posted by noricum at 1:27 PM No comments: 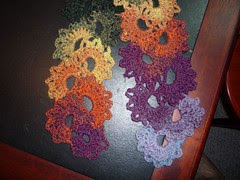 Gorgeous! I love the yarn in this pattern!

Posted by noricum at 1:25 PM No comments:

Posted by noricum at 1:23 PM No comments: 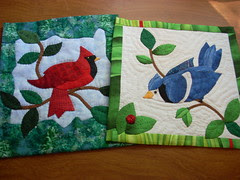 Posted by noricum at 1:22 PM No comments: