Waiting For The Bus

While waiting for the bus, I amused myself by reading the signs on the convenience store door: 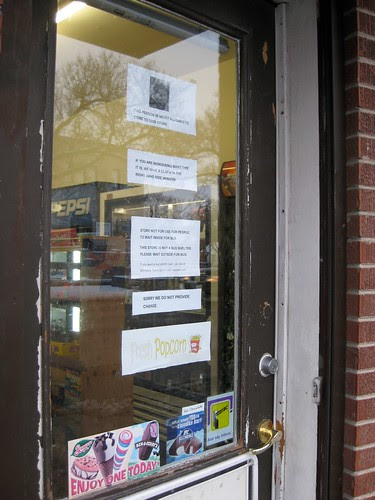 "THIS PERSON IS NEVER ALLOWED TO COME TO THIS STORE."

"IF YOU ARE WONDERING WHAT TIME IT IS, WE HAVE A CLOCK IN THE RIGHT HAND SIDE WINDOW."

"STORE NOT FOR USE FOR PEOPLE TO WAIT INSIDE FOR BUS. THIS STORE IS NOT A BUS SHELTER. PLEASE WAIT OUTSIDE FOR BUS. If you want a bus shelter here, call city of Winnipeg Transit at 311 and request one!"

"SORRY WE DO NOT PROVIDE CHANGE."

I came to the realization that posting the answers to frequently asked questions like this makes one sound rather crabby. (Whether they are or not, I don't really know.) Would that be your impression too? (I'm trying to learn how to present myself better, and so insights like this help... but only if they're correct.)

Comment about the clock: when you're looking at the sign, it's actually to the left... and in the left hand corner of that window. It's small too, and so took me a while to find it. (Even though I remembered seeing it before, once I spotted it. It probably didn't help that I started looking in the wrong window.)
Posted by noricum at 5:24 PM 2 comments:

What I'll do for my grandma...

She wanted nail polish. "Pink, but not too pink." You can't really tell from the bottle how it will look on the nail, so I decided to test them. 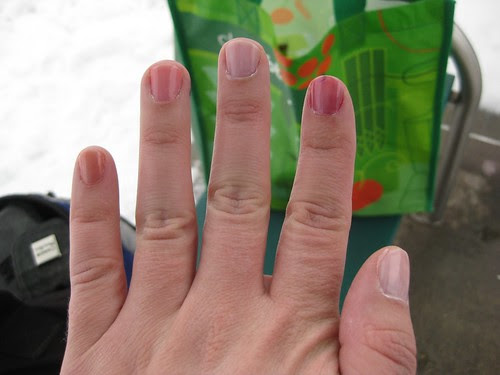 Luckily I ran out of colours I thought might potentially work before I ran out of nails. (I even had one spare!) I did feel rather silly in the store, though.

(The ink you can see on the sides of my fingers were where I wrote down colour information for the better candidates.)
Posted by noricum at 5:13 PM No comments: 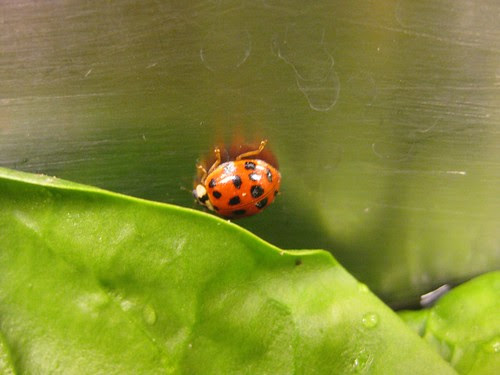 Last night I had some odd visitors for this time of year. One was this ladybug, which I think was imported with my spinach. (I don't think the ladybugs around here have red legs, although they do tend to come in the houses in the fall.)

The other was a mosquito. A *mosquito*!?!? At this time of year?! It was in my bedroom. It's been frozen for a while outside... I wonder how long it's been hanging out inside? Just how long do they live? (Off to google...)
Posted by noricum at 4:48 PM 2 comments:

Today: I need one or two bolts (with matching nuts) about yea big. In a moment of inspiration, I held up my clear tub, and had a look at what was rattling around loose in the bottom. Voila! Two bolts the exact right size! And hey, what's that nearby? A baggie with some nuts that look the right size! (They were!)

Today: I have a dolly that was designed as a cheap folding dolly, and the gears sheared off making it useless. Using my el-cheapo drill, the two bolts, a hammer, screwdriver, and vice grips... I now have a completely functional dolly. (It can even be folded again if you're willing to remove the bolts.)

In a few minutes I shall be using the dolly to take my laundry over to my mom's to use her washer and dryer. (It's warmer at mom's house... it's been about 13 degrees lately here, which is kind of nippy.) We shall see if something else decides to break on the dolly. ;)
Posted by noricum at 4:43 PM No comments:

Thumbs Up, Thumbs Down... 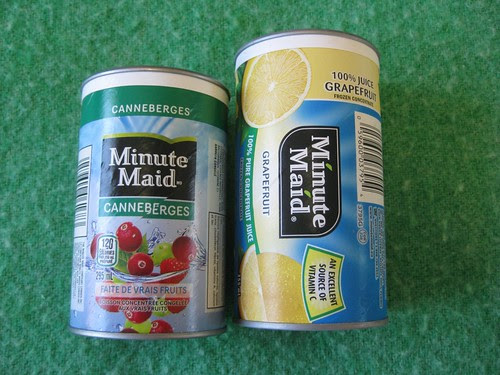 Minute Maid has shrunk its packaging for one of my favourite juice concentrates. (I like its taste, and it doesn't contain apple juice, or anything else I'm allergic to.) I actually bought this a while back. I noticed the packaging was more squat, but I thought that they had realized that they can use less packaging that way (shorter and wider = less surface area for the volume, yay environment!). It was only after I got home that I realized the diameter was still the same, and so they had shrunk the packaging *and* volume without shrinking the prices. Boo! First off, I hate that sort of dirty marketing, where they subtly increase prices not by changing the price, but by including less product. Second, now I have to wash the pitcher more often, because I get fewer glasses of juice per pitcher. *BIG* thumb DOWN!

I haven't bought this product since I made this discovery, I'm so peeved. 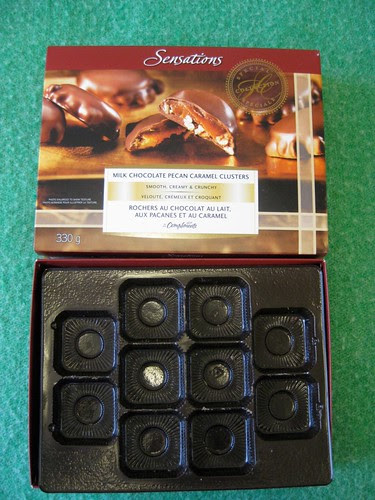 Turtles (real and fake) normally have 12 turtles per level. Sobeys brand has 10... so you end up four short of other packages. I feel this is another example of misleading packaging, making you think you're getting more than you are for the stated price. (Yes, there's a little number stating then umber of grams, but that's not as noticeable as the box size.) I will not be buying this brand of fake turtles again. Thumbs down!

Also disappointing: the package is now empty. (They were good while they lasted, though.) 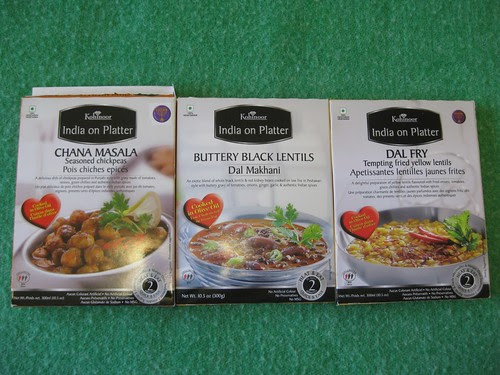 Yum! So far I've just tried the chana masala, and it was great! No artificial colours, no preservatives, no MSG (MSG is a big NO THANKS for me), easy to prepare, and pretty healthy! I had it with rice, and so it ended up being a gluten-free meal too. (Mom wants me to try eating less gluten.) And, for those who look for such things, they're also vegetarian and Halal certified, and it looks like Kosher as well. :)

The package claims to have three servings, but I polished it off in one. Probably if I had other things besides it and rice, and wasn't quite so hungry, it would have been more than one serving. (Or maybe it was meant to serve one, but counts as three servings of protein? Those food guide servings are weird.)

Thumbs down: I bought a lovely mug at a craft sale yesterday, and managed to break it on the way home. I feel like a stupid clutz. It's only chipped and cracked, but still in one piece... so now I have another pencil holder. *sigh*
Posted by noricum at 3:06 PM 1 comment:

I made more progress on my Adelie penguins Monday night at art class. 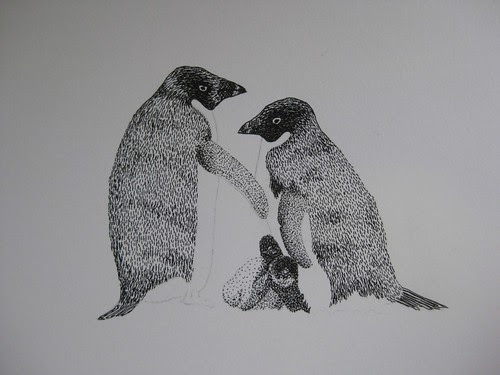 I really love how this is coming out.

This is also something I did at that workshop, but forgot to photograph before: 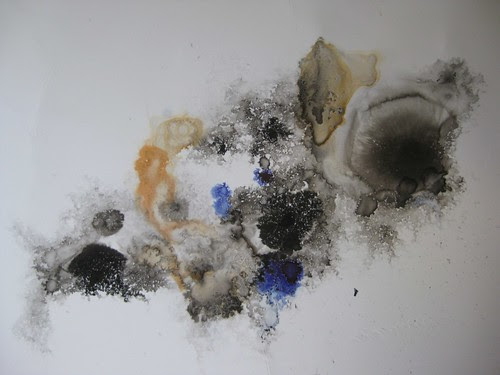 It's ink dripped on yupo paper, then spritzed with water.

Finally, on Sunday, I took a "painting with fiber" needle felting class. 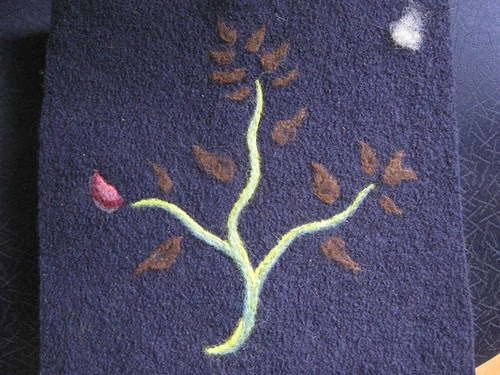 I didn't get very far, but we got to keep the supplies, so I can finish later. I had brought some of my own photos to work from, but then decided the class was really designed for us to follow the instructor's provided pattern.
Posted by noricum at 11:01 AM No comments:

Today I attended a pen and ink workshop. I spent the first part of the workshop getting used to dip pens: 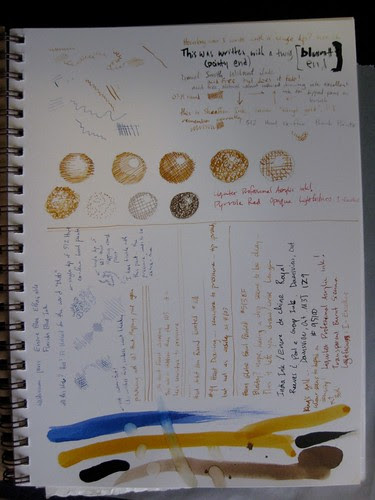 (The bottom smears are so I can do a light-fastness test.)

Then I started a real picture: 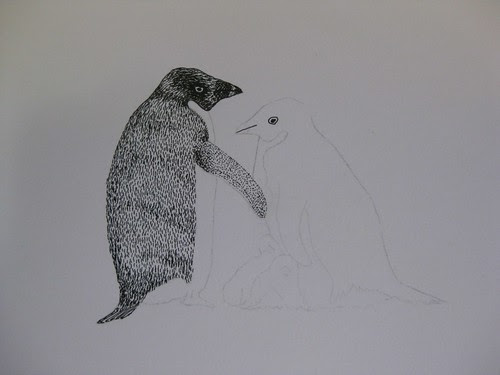 I'm quite happy with how it's turning out. :)

Last weekend was a watercolour workshop on negative space. I painted two small practice pieces before feeling tuckered-out. The first one is a close up, cropped image of an aspen twig and leaf stems: 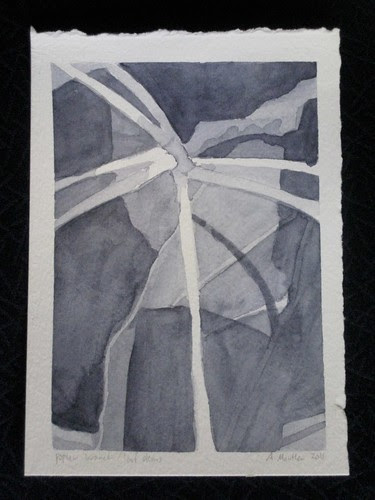 (Not that it's at all clear what it is.) The second is much more recognizable: 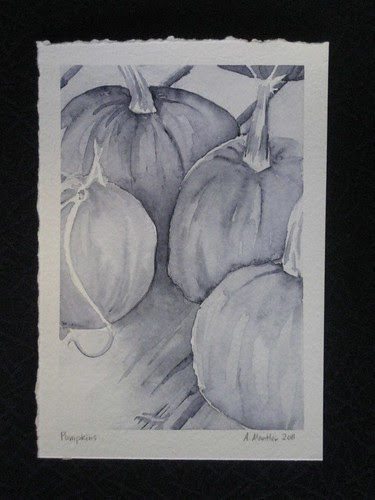 Finally, here's another photo of Raffi: 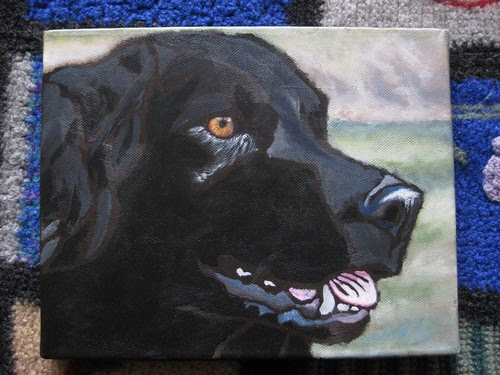 I haven't done any more on it since the last photo, but this one was taken in daylight, and so is a bit better.
Posted by noricum at 7:21 PM No comments:

This is my display from the art show: 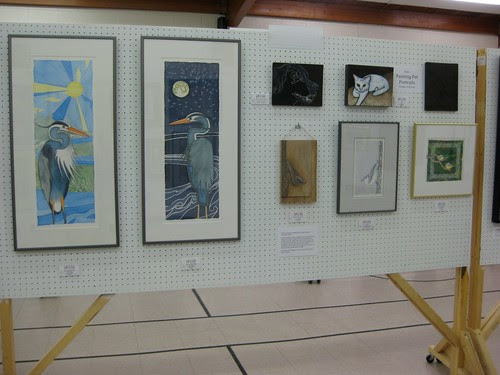 And my shrinkwrap area: 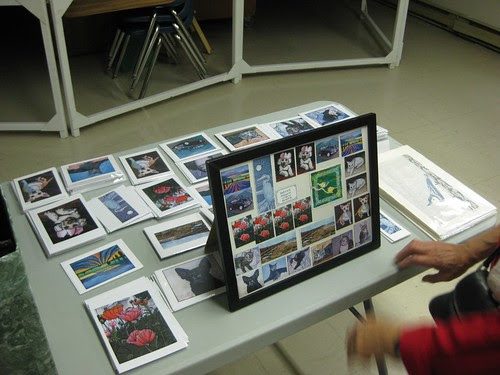 I took this photo of my garden on Saturday: 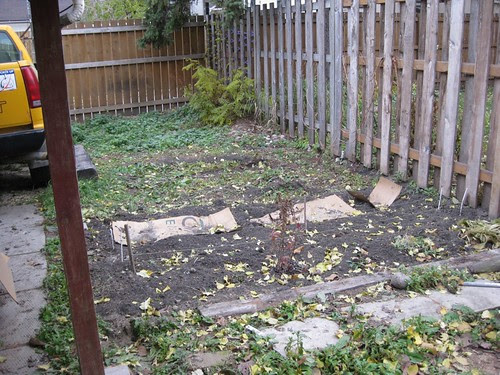 It's probably looking rather whiter and fluffier now.

The cardboard is where I stood while planting my garlic, so that I didn't sink (as much) into the mud. The area between the cardboard and railroad tie is planted with two rows of garlic and/or onions, plus one row of random perennials (next to the tie) from a neighbour. The part starting just past the cardboard still needs to be dug. Looks like that will be spring, now. ;)
Posted by noricum at 10:46 PM No comments: 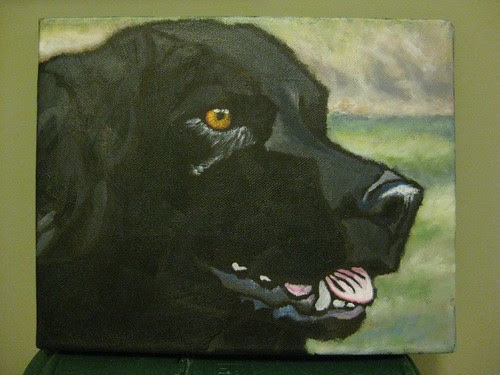 Sheesh, this is a *hard* painting to photograph! (Especially indoors at night.) I think this was the best of the four I took, but it was hard to tell. (Do I prefer this reflection or that, this under-exposure or that over-exposure?)

This is one of the two dogs I worked on at the demo I did at the art show. Tonight I painted the background, painted the lips and worked on the nose, and also made the eye bigger. I still need to do a bit more work on the mouth, and then add the rest of the fur highlighting. I didn't make any progress on the other dog tonight, so it's still just a chalk sketch.

I gave B my camera during the demo, and he took tons of photos of me. Here's one: 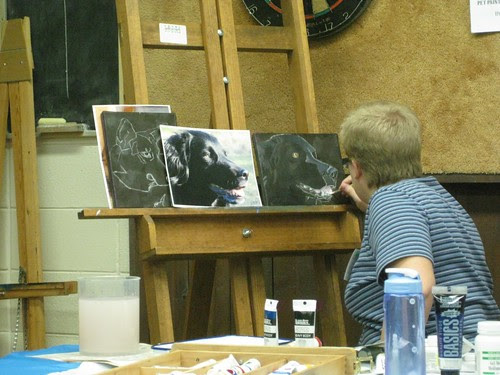 During the demo I sketched the second dog, and painted the eye, tongue, and did some fur highlighting (around the eye) on the first dog.
Posted by noricum at 10:29 PM 2 comments:

I have some meat that's been in the freezer for probably way too long. (It's been in the fridge freezer for a really long time... probably more than a year.) Is it just garbage now? Can it be rescued by using it in a stew? Can stock be made from it? Any ideas? It's a shame to just throw it out... although my dad's dog would probably take care of it.
Posted by noricum at 2:28 PM 5 comments: