I have paintings that I haven't finished, but that didn't stop me from starting two new ones tonight: 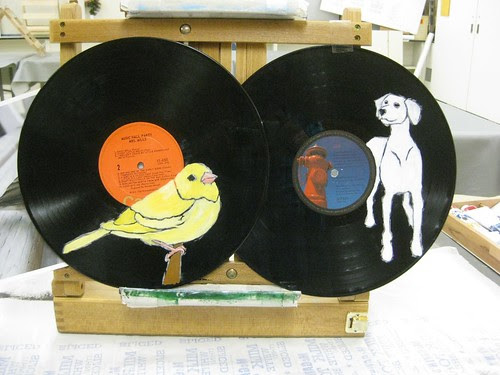 ...but I have an excuse. The upcoming art show has a theme of "nostalgia", and I asked folks on freecycle for records for this idea. It would be a shame for people to give me records to paint, and then not get them done in time for the art show, right?

The dog will be a dalmatian, and I got the inspiration from the fire hydrant on the label. The canary is inspired by one of the songs on its record: "Bird In A Gilded Cage". (The gilded cage bars are coming. I'm only going to paint them behind the bird, though.)

I still need to clean the chalk sketch marks off both. I want to let the paint dry really well first.

I feel a little bad at how pleased I am with myself... but it's also nice too, because I'm happy. It's nice to be happy!
Posted by noricum at 9:47 PM No comments:

Random collection of photos from the past week 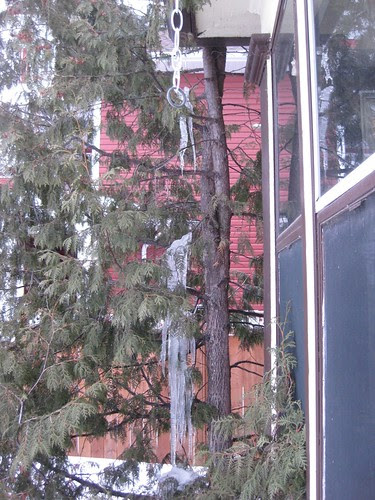 Cool icicle! Uh... dang... that probably means that corner needs the gutter join caulked too. (I should probably just plan to do all of them when I take care of the worst spot.)

The snowbank I decided to not shovel through last weekend: 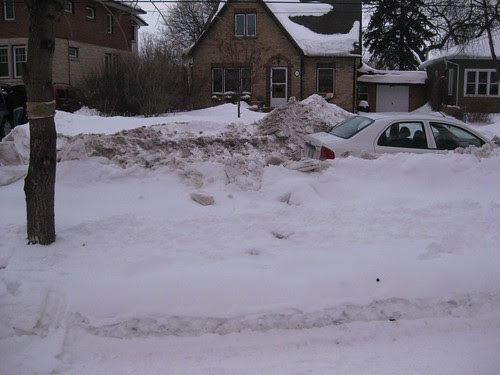 (Given that it took me three hours to do everything else, probably a good decision.)

The corner with the gutter problem I've known about the longest: 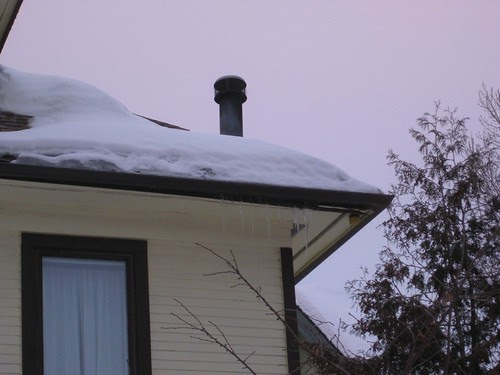 A section of rotten wood needs replacing, plus there's the fact that the drip leaves a dangerous icy patch on the sidewalk to the back yard. (I wonder why dad didn't fix this when the house was repainted a couple of years ago? That would have been the best time to have done it, and I'm pretty sure it was a problem then too. Another reason not to hire a student to paint the house... there's more to painting than just slapping on paint!) 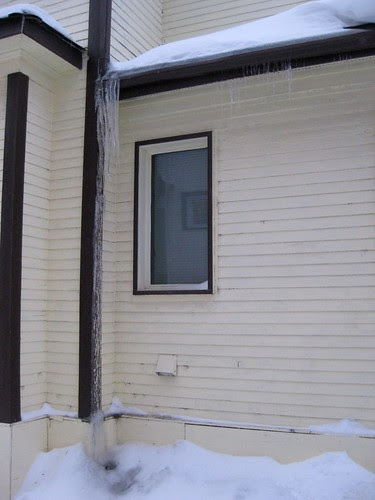 This connects to the part in front of the kitchen window that was dripping last summer that dad "fixed" (not sure what the fix was), but that part is also looking... wonky. I'm not sure if I should consider replacing this whole stretch, or if this icicle is inevitable, given that a big patch of the upper roof drains to this spot, and there's probably a good chance that the lower gutter, spending more time in the shade, probably fills with ice. Well, I'll get up there with a ladder this summer and have a look... maybe see if cleaning and caulking does enough to hold it for a bit longer.

Hee, I think I have a mini-table glacier: 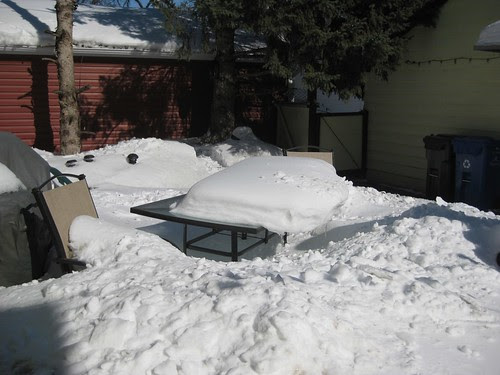 Taking a short walk off a shorter table?

I needed to clear my head on Thursday (too much bashing my head against the same frustrating bug), so I took a walk around the neighbourhood near work. At least my house doesn't have this big of a problem: 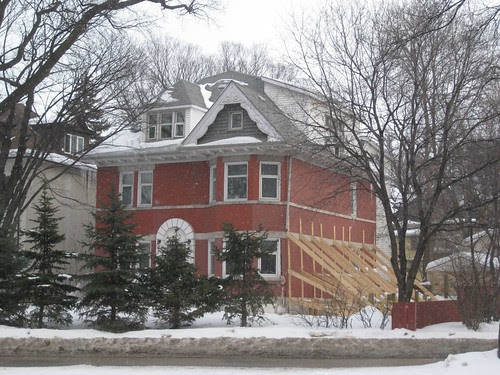 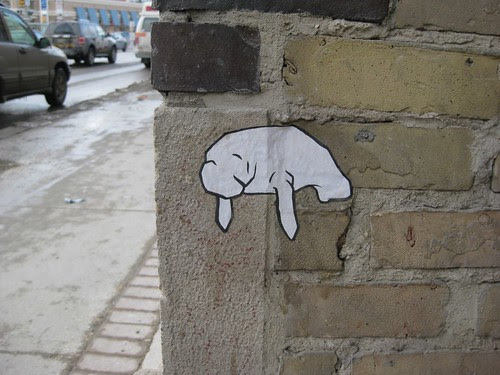 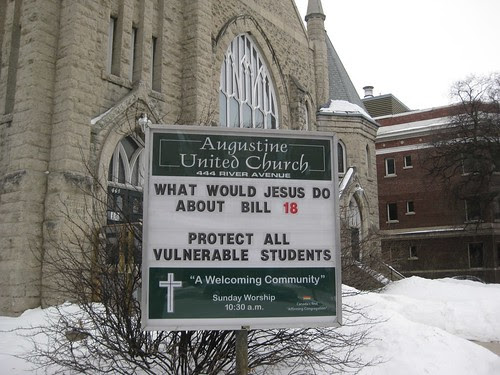 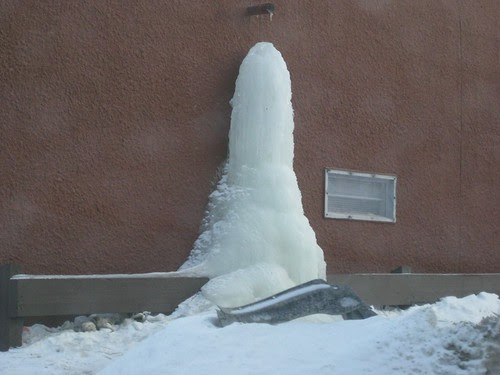 (And that is *not* my house, thankfully!)

This weekend I took a workshop on making Shaker boxes, and made these three awesome boxes: 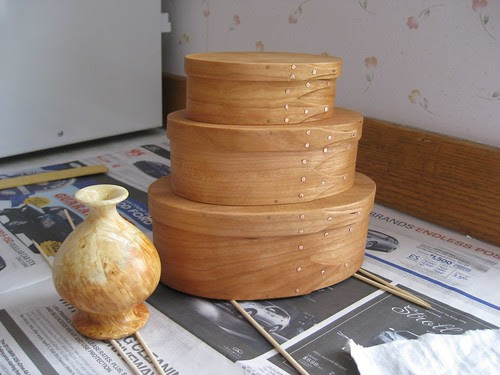 While I was putting the finishing on them, I finally got around to putting the finish on my turned piece too. They'll all need another coat or two, but at least I got one on!
Posted by noricum at 9:45 PM No comments:

A tale of two squirrels

I put the bird feeder up after winter had already started. Despite a little red squirrel feeding there too, the seed level would only descend slowly. Then, this past weekend, I noticed a *dramatic* drop in seed level over very little time. What had changed? Word had gotten around! Saturday I counted around a dozen birds at the feeder: sparrows, finches, chickadees, nuthatches, and woodpeckers. I figured I should grab my camera, there were so many birds! Of course, by the time I got back to the window with my camera, the birds were gone... my little red friend was there: 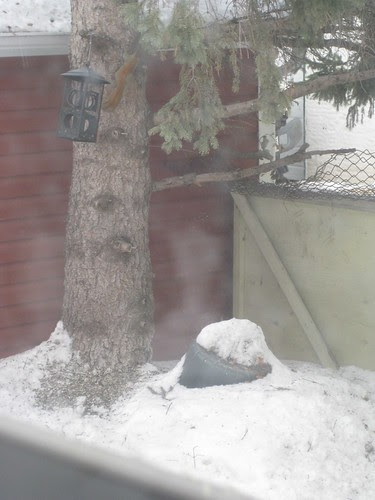 He was nice, though, and only had a few seeds before letting the birds back. (I'd post a photo of the birds, but they blend fairly well with the trunk, so it's hard to see them with all the spots on the window... which prompted Saturday's cleaning frenzy.

However, I suspect the real reason for the drop in seed levels is this pig, a grey squirrel: 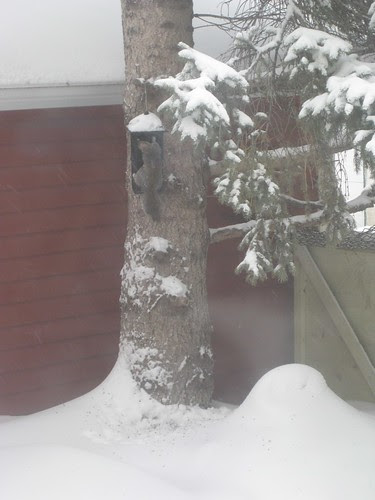 When I took this photo, my little red friend was higher up in the tree, and eventually he gave up and scampered away. :(
Posted by noricum at 10:20 AM No comments:

This weekend I:
- cleaned the toilet
- washed the kitchen window (well, the inside... I'd have to shovel a bunch of snow to do the outside, and, although warmer, it's still below freezing out there... not the best time to wash windows)
- swept kitchen floor (mostly because the shelf/board I moved to wash the window dropped crud on the floor... wiped the board down too)
- glued soles back on cheap sandals I wear at work (on warm days)
- caulked along board that runs along the counter with the kitchen sink
- recaulked parts of tub where caulk was failing (more accurately, built up caulk)
- laundry
- went to Rona (twice)
- planned how to make upstairs shelves pretty

Photos of recent "got $#!t done" episodes that I didn't manage to blog until now:

Laundry room cabinet going up, before I realized I put the centre panel in facing the wrong way, so that the narrow part would get two doors, and the wide part one: 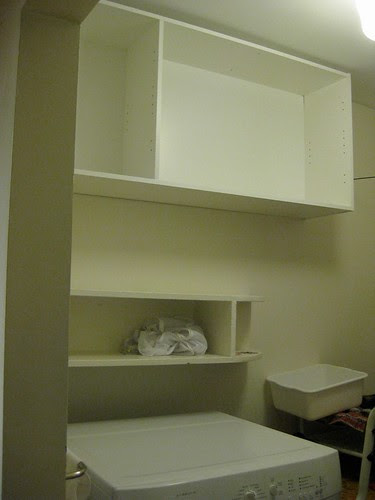 Boo-boo from not being careful enough when taking cabinet box apart to change the centre panel: 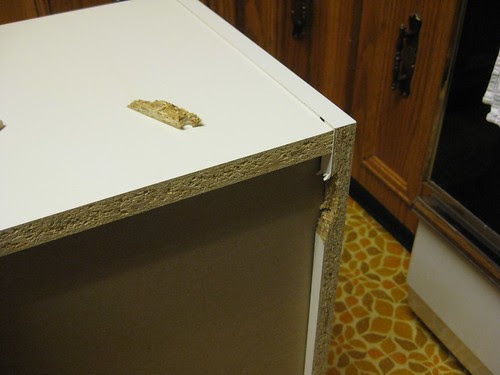 I can repair that!: 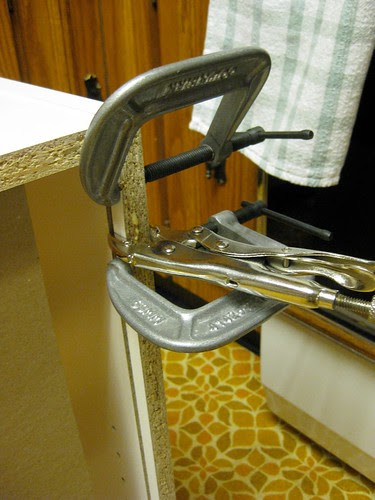 To-do list I made for when a friend came to visit: 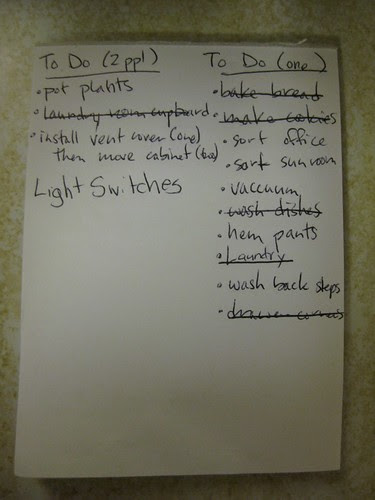 (She visited and knit, and kept me on task. I visited and worked. If she felt so inclined for any reason, she was permitted to direct me to do a different task. Friend did an awesome job! Look at all that stuff crossed off! Oh... and I didn't take a photo of the column of drawers that now line up and slide much better now that their broken glide corners have been replaced.)

Laundry room cabinet after the centre panel had been adjusted: 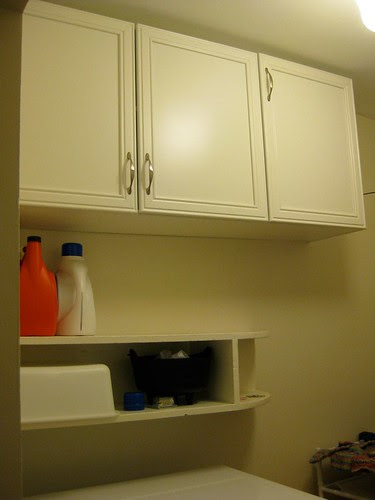 Yeah, whoops. I decided I wanted the wide spot on the left, not thinking about the effect that would have on the doors. I decided I didn't care.

Of course, the cupboard, being el-cheapo particle board, didn't take long to start to sag under the weight of a bunch of laundry detergent. Fix: Add some screws to the bottom up into the back support, and put a piece of moulding under the cupboard. I am tres impressed with the miter job I did: 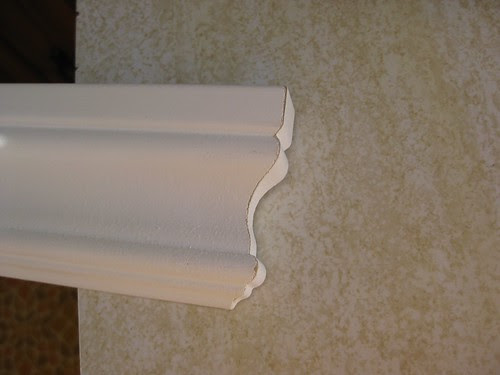 (It turns out I *can* use a miter box if the stuff I'm cutting is soft enough... and, being MDF, this stuff was nearly cardboard and super-soft.) 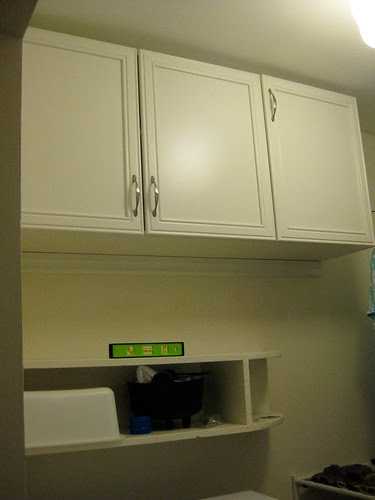 Observation: nothing like nearly-level cupboards to make it apparent just how unlevel the existing shelving is. (Gotta love old houses where *nothing* is square!) 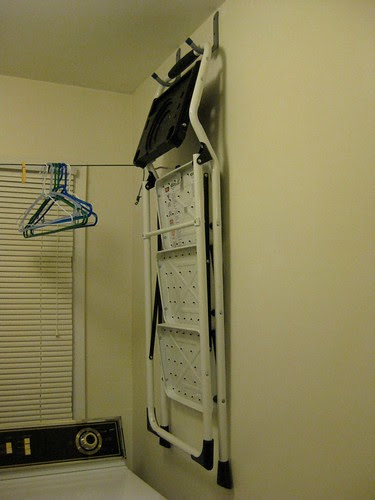 Oh, and a friend/coworker and I fixed mom's laser printer. I (and my coworker) rock. The printer-repair guy mom paid previously *doesn't*.