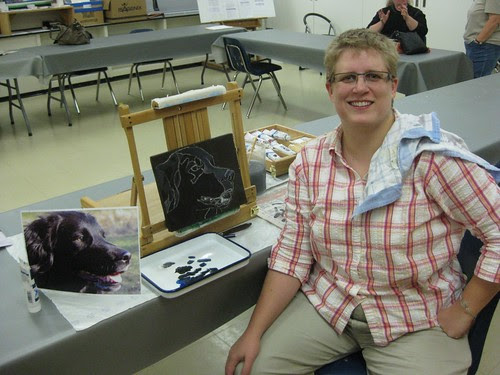 I'd like to invite you to an art show that I'm in next weekend: 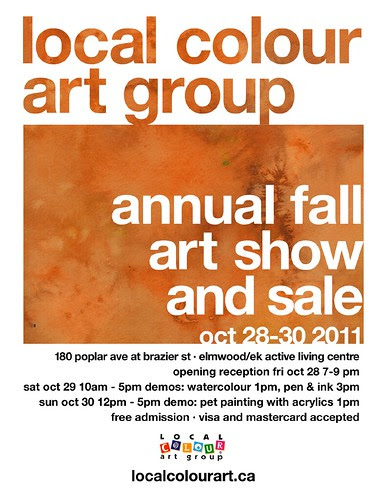 I'll be doing the pet portrait demo on Sunday, and will be there the whole time on Friday and Sunday if you want to say hi.
Posted by noricum at 12:54 PM No comments:

Since I was behind on my sleep, I let myself sleep in this morning to catch up. Then I was slow getting moving... so it was rather late by the time I got moving to do some gardening.

This is the chunk of dad's old yard that I plan to devote to veggies: 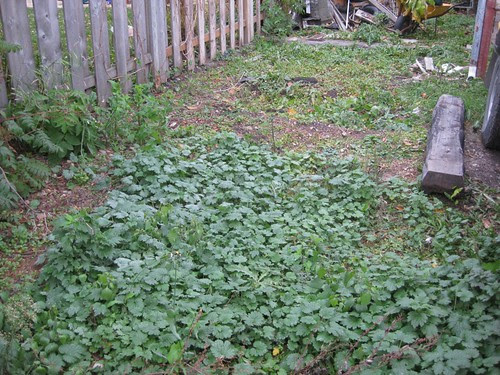 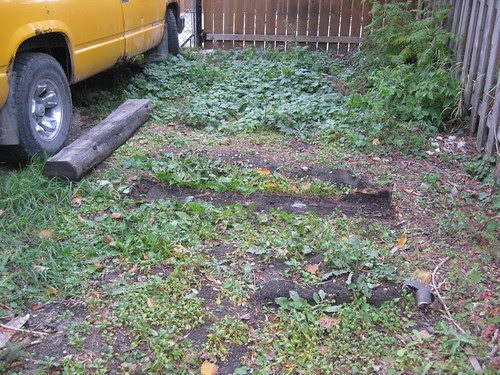 A neighbour has been parking his truck in the back. Annoyingly, he parked such that I couldn't get the wheelbarrow through to the garden, and had to go around to the side gate. (There's a step at the side gate.) 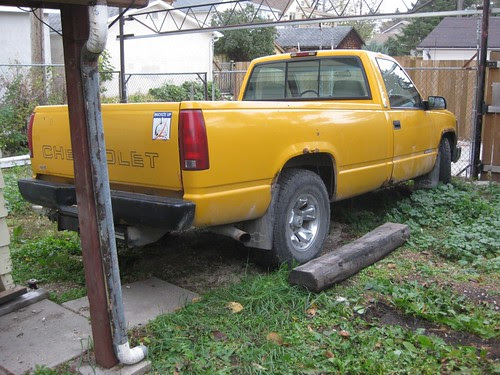 Although this morning was dry, the clouds did open up shortly after I started. I decided that I didn't care, since I was going to get sweaty and dirty anyway.

Shortly before the sun set, I decided to take a progress photo: 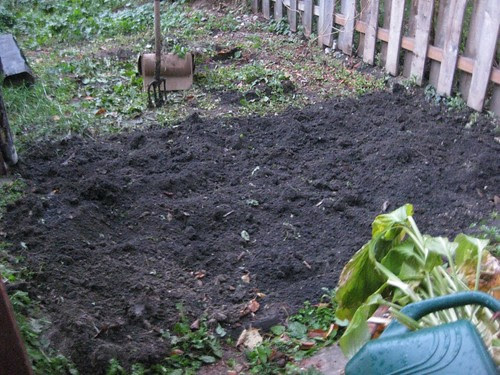 I could tell that was going to be blurry from the low light, so I turned on the flash... and my camera decided it didn't have enough battery for that. (I had a spare, but didn't feel like digging it out, since it's one that has trouble holding a charge, and might have been flat anyway.)

Shortly after I took that photo, the rest of the light left. Then it started raining harder. With lightning. And there I was, planting onions and *garlic*, at night, in the rain and lightning. I felt like I was in Transylvania or something.

The motion-light didn't have it's sensor pointed in my direction, so I had to keep going over to turn the light back on. After I had some perennials in the ground (which will eventually be transplanted elsewhere), plus two rows that included three types of garlic and a winter onion, I decided that was enough. I got some of everything planted, so even if I don't get the rest in, I feel like I didn't waste what people gave me. (I had intended to do separate rows for the four varieties, but decided that the light and weather dictated otherwise.)

It was *really* pouring by the time I packed it up for the night. I was able to wash my hands by holding them in the drips from the eavestrough (where there shouldn't be drips). The garden tools were wet and muddy, but there wasn't much I could do about that. I put the box of weeds by the trash, took the tools back to my mom's, and then headed home. 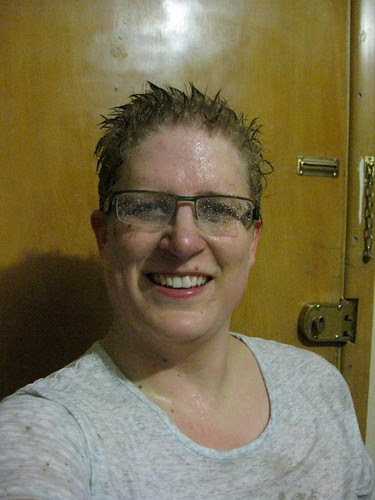 Yeah, I'm glad I didn't bother having a shower before I headed out.

Looks like I brought some of the garden home with me: 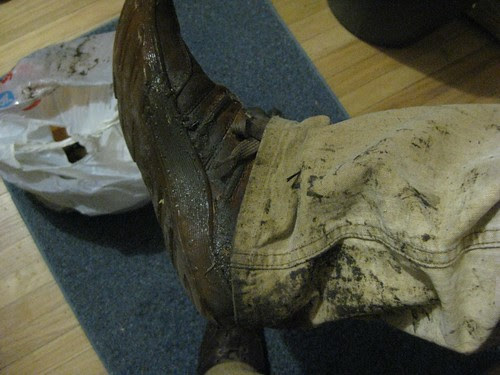 I stripped on the entrance mat, then put everything I was wearing, plus the gardening gloves, in the shower for a pre-laundry rinse. Thankfully Red River gumbo comes out of clothes fairly easily. After doing laundry, there was still a green stain from some of the weeds, but all of the mud came out.

If I'm lucky, I'll get another chance to garden before winter hits, and can get the rest of the onions and garlic in. (I have more than I can possibly use... but it seems a shame to waste the baby bulbs.)
Posted by noricum at 12:36 AM 2 comments:

When I went over to my mom's to borrow the gardening supplies, I found a little junco who seemed a bit stunned. 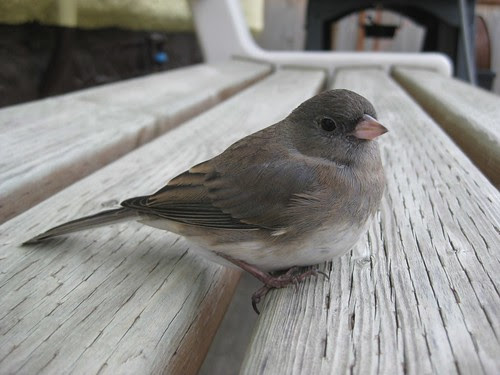 I suspect he was recovering from an encounter with the kitchen window. I took the opportunity to take a bunch of reference photos, before he eventually decided he had enough and flew away.
Posted by noricum at 12:33 AM No comments: 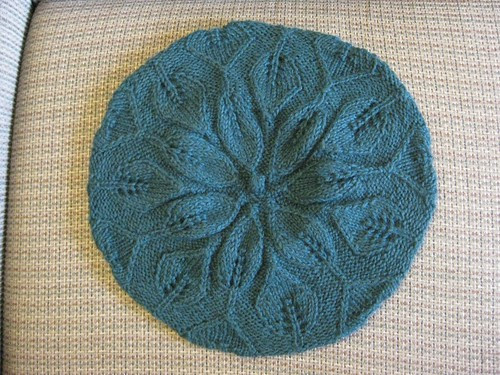 One for my grandma: 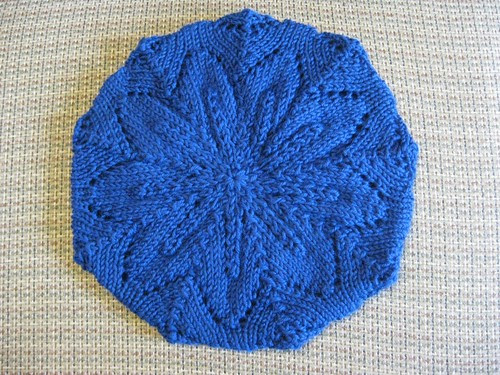 Sometimes when I pull my laptop (13" MacBook Pro) out of it's case in the morning, there's these little bits of plastic. 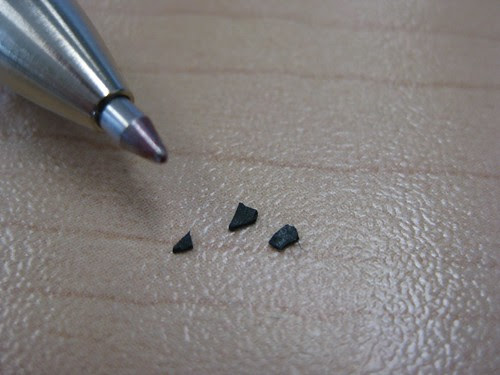 (Pen tip for scale.) I have no idea where they're coming from. Not from the case: the case is blue felted wool. They don't seem to match anything on the computer either. Anyone have any ideas?
Posted by noricum at 3:36 PM No comments: 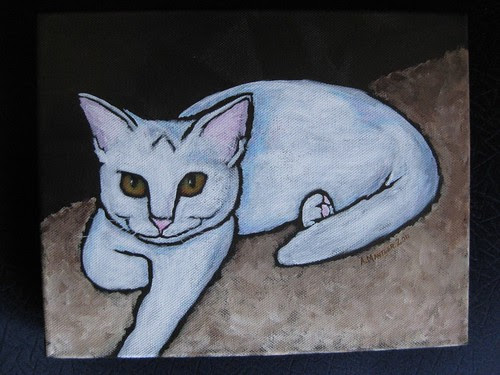 Signed, but not yet sealed or delivered.
Posted by noricum at 3:33 PM No comments: 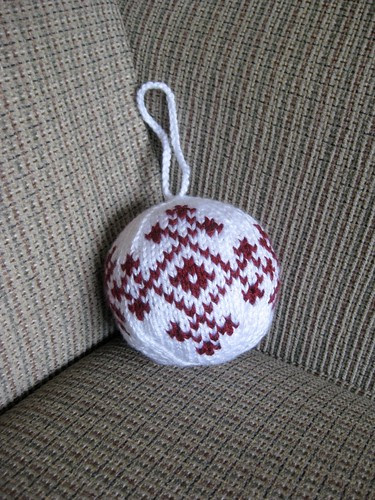 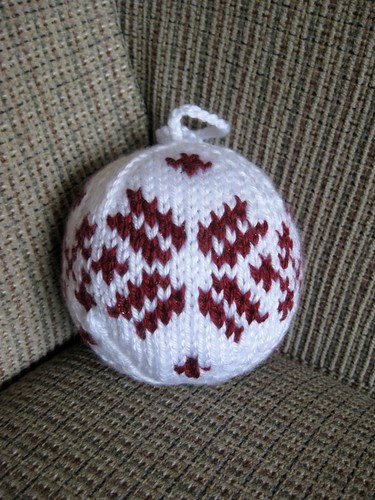 Of course, since I didn't check the gauge before going yarn shopping, this ended up rather large... about the size of one of those large navel oranges or a grapefruit.

I'm going to try the same yarn on smaller needles to see how it looks.
Posted by noricum at 3:17 PM 5 comments:

The other night I whipped up a potholder out of some leftover Malabrigo to see how it felts. (It seems like sacrilege to felt Malabrigo. However, I have ideas for a Christmas present... should I finish it in time.) 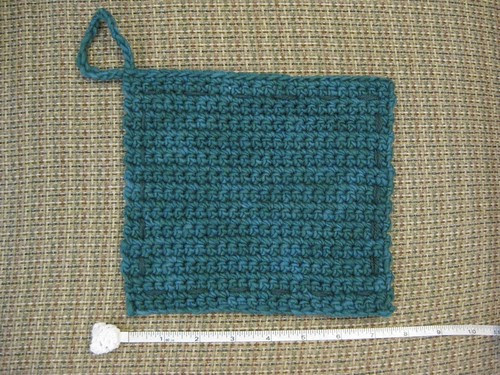 I tossed it in with two loads of laundry yesterday (I forgot to leave it in with the third), and it definitely still needs more felting. Results to come.

I also finished a beret for me out of Royal Alpaca: 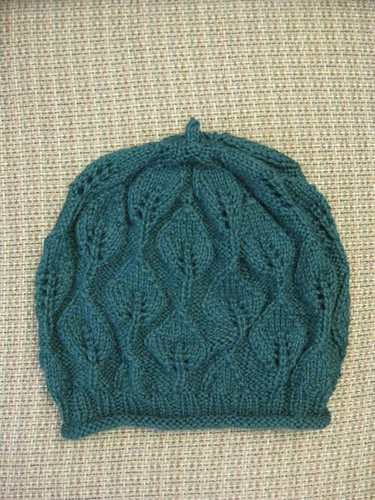 (I haven't blocked it yet.) It's the Meret, but with my "own" lace pattern (modified from a Barbara Walker edging), more rows, and a nub at the top. So I guess it's just the stitch count and the brim that's from Meret. But it's not the regular Meret brim, it's the alternate one listed that knit-along knitters used. So I guess it's not really a Meret, is it? Whatever it is, it's done (except for blocking), fits, and should keep my head warm in a (hopefully) non-hair-squishing way.

Now that the needles from my beret are free, I've started a present for my grandma.

I'm heading over to my mom's for Thanksgiving soon. I made the cranberry sauce.
Posted by noricum at 3:09 PM 3 comments:

I'm working on another pet portrait. Here's what I've done so far: 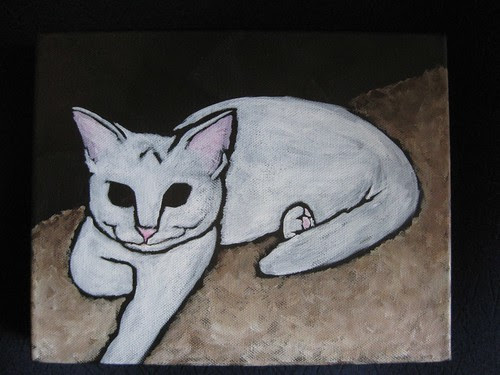 I'm not sure I'll finish it in time for the show at the end of the month, though.
Posted by noricum at 4:44 PM No comments: