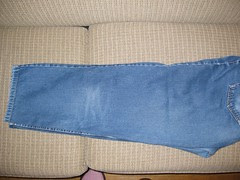 • Pair of old jeans (like the ones above, whose zipper died well before the material did)
• sewing scissors (scissors that have only been used to cut fabric... paper dulls scissors)
• sewing machine
• thread (I normally forget this one... but today I didn't really care what colour it was, so I used what was already threaded.)

Step 1: Fold the jeans so that the leg seams line up: 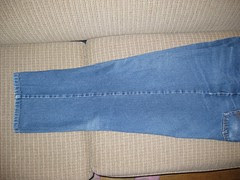 Step 2: Cut one leg off using a curved line: 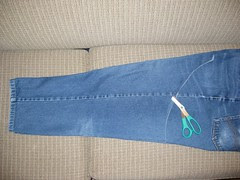 Step 3: Turn the jeans inside out, and practise sewing tucks at the bottom of the leg: 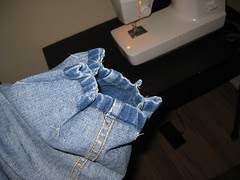 (By "tuck", I mean to fold the jeans where you want the tuck to be centred, and sew a diagonal line from the hem to a point somewhere up the leg.) Stop when there are enough tucks so that the bags won't fall out, but there's still a big enough hole to pull the bags out of. Note: I didn't bother cutting the spare material off.

Step 4: Double-fold over and sew the top edge, creating a nice hem, then make a messy attempt at a button hole: 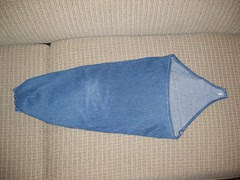 Step 5: Stuff the bag holder full of those free trash bags you get when shopping, and hang on a hook in the broom closet: 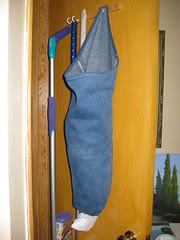 (Note: the actual designated hook for the bag holder is much lower, but it's around the corner where it's hard to get a good photo due to the desk piece blocking me from fully opening the door.)

If you want to, you can use the other leg for those bags that don't make good trash bags, but are still useful for other things. However, my sewing enthusiasm ran out after the first one, so I'll just use a narrow non-trash-bag for those. (For now, at least.)
Posted by noricum at 11:22 PM 3 comments: 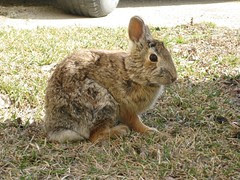 This little fellow is one of my favourite neighbours... quiet, non-smoking, and *adorable*!

Whoops... the Flickr monthly limit is now 100 MB, not 20 MB. Had I checked that earlier, that would have saved me an hour or two the other day. *sigh* (I was using Flickr Uploadr, and it was lying to me a bit about size limits... it didn't update the "you're trying to upload too much" indicator after the images were resized until I removed and re-added an image.)
Posted by noricum at 11:07 AM No comments:

When I woke up this morning, it was snowing. (And cold in my apartment.) So I closed the windows and went back to bed.

It's now warmer in my apartment, the sun is shining through the clouds, and it's no longer snowing. Plus it's 2 pm. I think I'll get up this time. ;)

(I was up late, preparing to upload some photos for my dad. I gave him all the unedited photos for the wedding on a DVD, but it turns out that he doesn't have a DVD reader on the laptop he took with him on the honeymoon. So I created a new Flickr account (and Yahoo account, after "breaking" the Flickr account on an existing Yahoo account), and am trying to pare down the number (and size) of the photos so that I can give him a nice selection in under 20 MB. *sigh* Four hours of working at it last night, and not only am I still well over the size limit, but I haven't even gone through all the photos! At 2 am, I had to pack it in, because I couldn't keep my eyes open any more.)

I'm still tired, but I need to get up so I can do laundry this weekend. (I wasn't able to do laundry last weekend due to the wedding and my cousins being in town.)
Posted by noricum at 2:04 PM 1 comment:

I just finished a scarf, and it's *awesome* in a crazy way. Check it out: 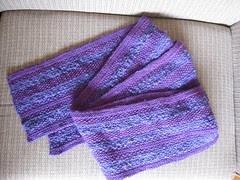 Now, it looks all innocent in that photo up there, but that thing is *huge*!!! In this next photo, it's wrapped around me twice, and the ends still hang to my waist: 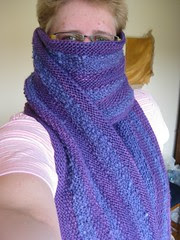 Doubled, it stretches from my nose to the floor, making it around 10 feet long!

I even had yarn left over: 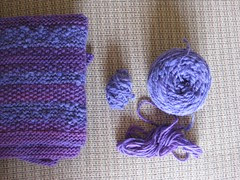 Here's a close-up of the stripes: 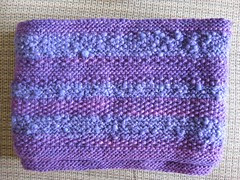 This thing is so heavenly, squishy soft. Mmmm! I think it'll have to be about -30 to wear it, though. ;)

Yarn requirements:
Two 100 gram balls of Malabrigo, three balls of roughly 50 gram balls of handspun.
Scarf recipe:
Cast on 400 (or desired number of) stitches. Knit garter stitch for a while, then some seed stitch, switching back and forth as desired. (Or if you screw up the seed stitch, use a few rows of garter. Tinking half a row or more isn't worth it.) Switch between the Malabrigo and handspun when a ball is finished, or part way through the ball of Malabrigo as desired.
Posted by noricum at 3:23 PM 5 comments: 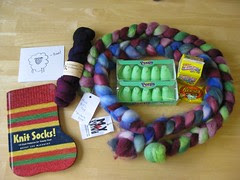 I won the Stitch-It Podcast "Steek It" contest! My first Wollmeise!!!! Such a *pretty* colour! And other wonderful goodies! Mmmm... pretty roving from her etsy shop!

This actually arrived last Thursday (as a missed-parcel slip), and I picked it up on Friday... but life has been so crazy-busy that I haven't had time to blog it until now. (Sorry!)

Um... the nuclear-green peeps scare me. I'm working up my courage to try one. (I can't remember if I tried a peep back when I was living in the USA and P was my roommate.)

One of my visiting cousins enjoyed the peanut butter cup, due to my allergies. I've been enjoying the Whoppers, though. :)

Hmmm... perhaps things have slowed down enough now that I can actually look through the socks book? ;)

To the five TV stations I'm able to receive signals from: *Please* don't broadcast this dreck! I have little enough to choose from as it is!
Posted by noricum at 9:44 PM 1 comment:

Walking to the far bus stop: 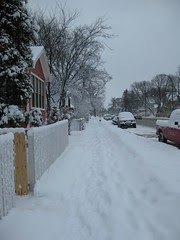 Taken from the bus: 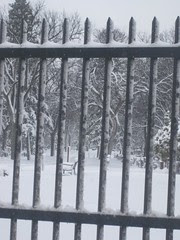 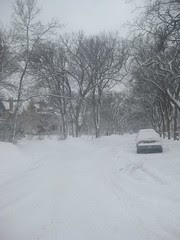 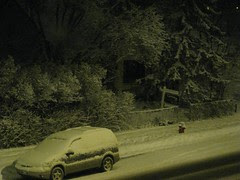 Photo taken last night as I was going to bed. The fluffy snow falling in the lamplight was pretty. :) (My camera can't catch snow falling in lamplight, due to the high ISO required at night, and the motion of the snowflakes.)

Posted by noricum at 7:43 AM No comments: