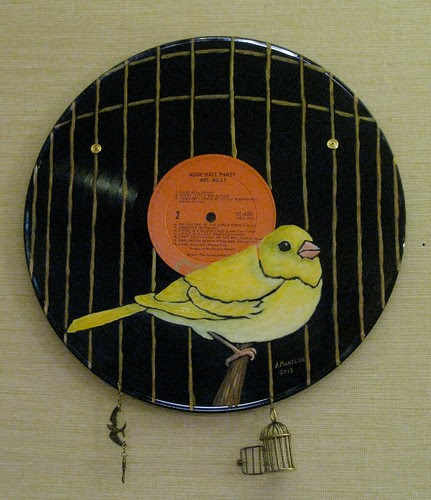 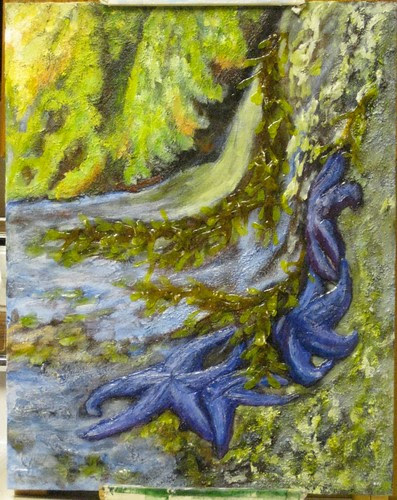 I have been crazy-busy, but in a good way. Here's a brief summary: 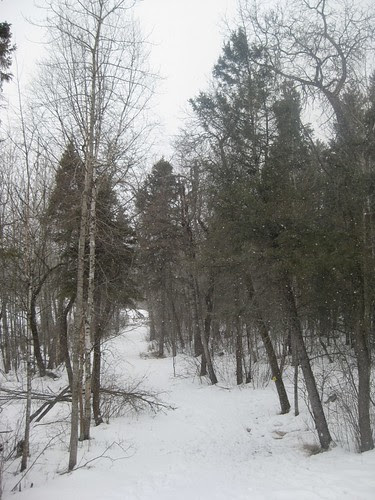 1. Last weekend I had a Thursday evening to Sunday afternoon retreat with a spinners and weavers retreat. The weather was more winter than spring, but we had a *fantastic* time! One of my "so awesome, I don't know how I deserve her" friends (who wasn't even able to attend the retreat this year) surprised me with a *gorgeous* batt from Wild Wind Naturals. I petted it and showed it to everyone, but forgot to take a photo before I started spinning. I did remember to take a photo of the yarn (not posted), and the final result, finished while I was at the retreat: That pom-pom is made from the extra locks tucked between the ribbon and the batt as decoration. At the retreat, we decided it was a "Canadian fascinator"...: "Canadian", because it's on a tuque, not a useless little hat! ;) 2. Monday at art I finished painting my "Bird in a Gilded Cage", but haven't added the last few (non-painted) finishing touches: 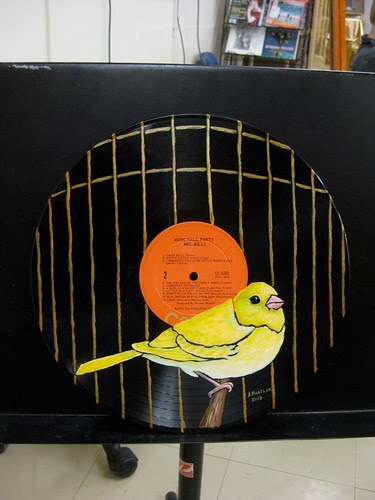 Then I worked some more on my starfish: 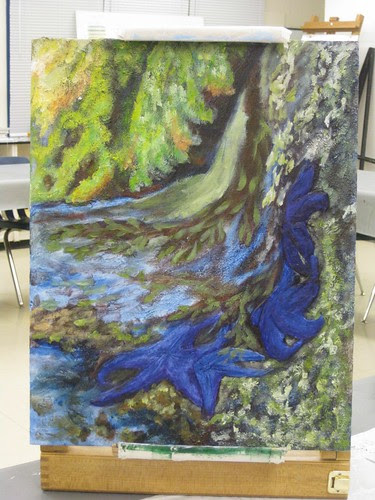 Wow... not too much more and I'll be finished this too! 3. Thursday evening I was at a workshop (two evenings, one Saturday) on making bent-shaft canoe paddles. Here's some of the instructor's paddles he brought to show us: 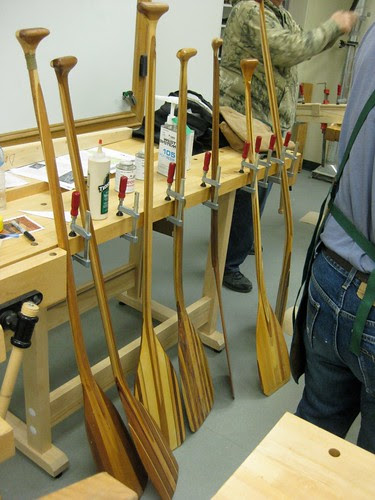 We got as far as preparing the jig and gluing the strips of wood for the shaft: 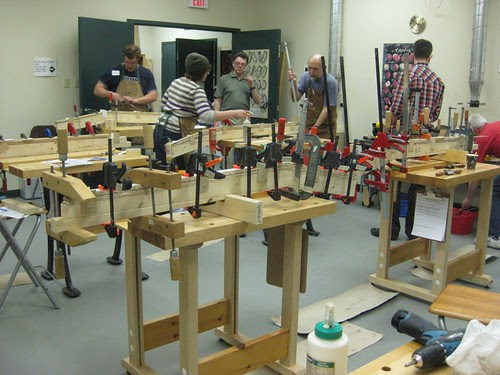 Mine is in the foreground of this photo. It's made from walnut, ash, pine, and maple. 4. Today I did a bit of spring tidying of the garden, clearing a bunch of old growth on the perennials... four wheelbarrows full, if I remember correctly. I discovered another thing to add to my to-do list... install a window well for this window, whose sill has half rotted away: 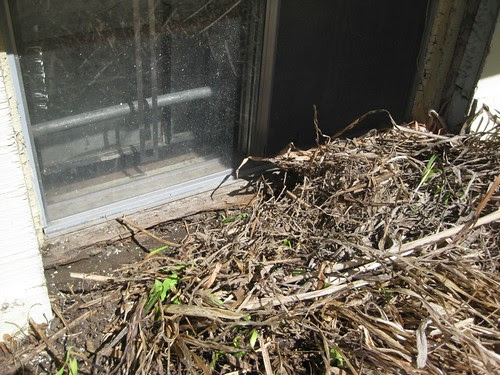 I forgot "before" shots, but remembered "after" shots: 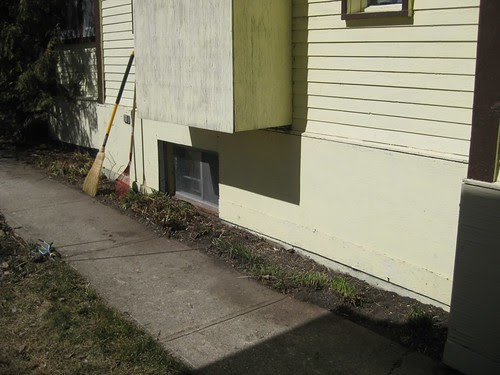 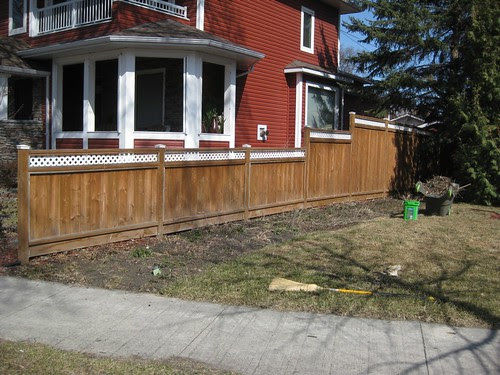 *Much* better, although it will need digging-up of weed taproots, dividing plants, moving them around, adding organic matter... but, it'll hold for a bit now. In the photo below, the pile on the left is mostly the stuff I removed from the garden, plus some partially-composted leaves from last fall's pile layered in to help the process: 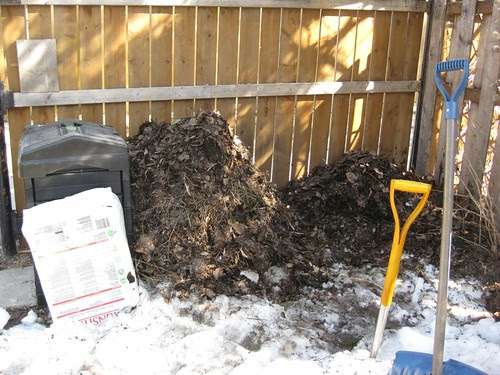 (I also turned the pile of leaves from last fall, and shovelled some snow so that I could get the wheelbarrow here. After I took this photo, I tossed some snow on this pile... I figure the moisture will help the composting, and anything that gets absorbed by this pile won't be adding to the mud in my parking spot. :P This cat really likes hunting for mice in dad's junk pile, but I don't think it likes me very much: 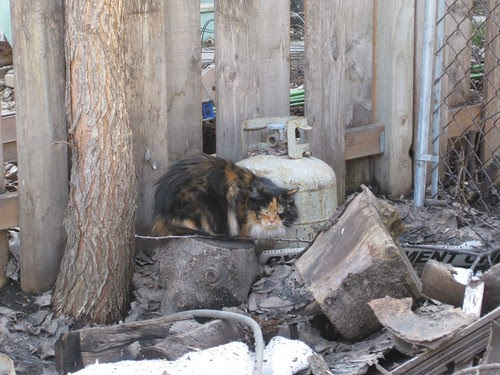 This photo was taken Sunday: 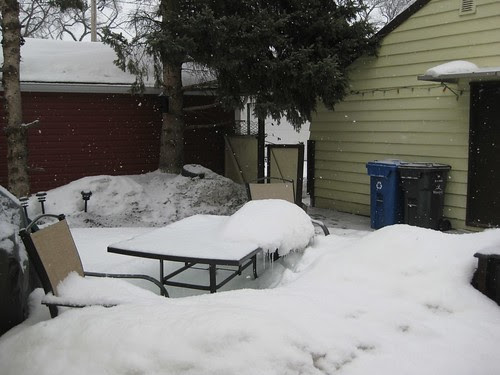 As you can see, the table-glacier is melting... but more snow is falling. *sigh*

In preparation for the spring art show, I've finished the nostalgia-themed piece I'm donating to the raffle: 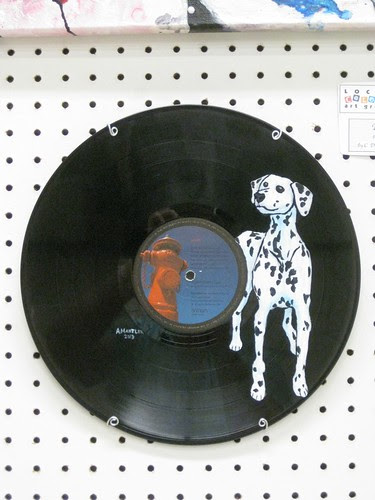 (proceeds go to Alzheimer's Society), and have made progress on a related piece that will be for sale in my section: 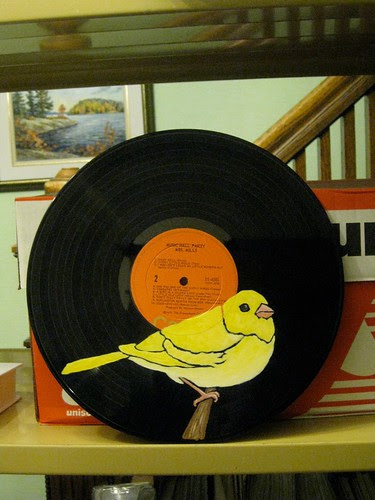 Posted by noricum at 1:05 AM No comments: