I made it out to the art club tonight! Yay!

You may remember, a while ago some friends and I went up to Sheeples. We got a bit lost on the way, and found this gorgeous marsh: 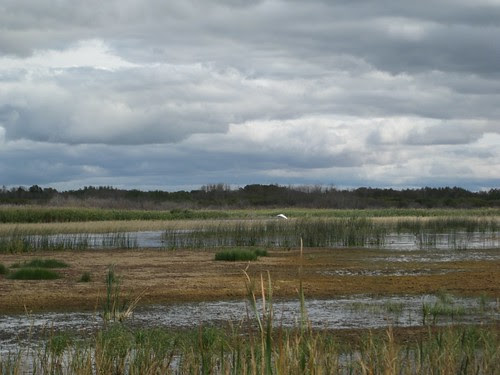 I thought this photo would make a nice painting, and be a fun one to do with the palette knife. Tonight I finally started the painting: 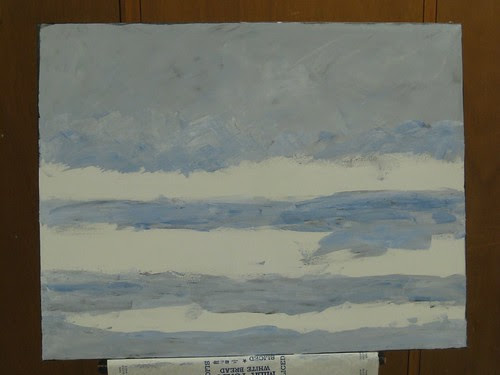 As you can see, I still have a ways to go. (Both with the painting in general, and with getting the palette knife to do what I want.) However, I had fun! (Despite the struggle I had with the wimpy easel.)

I also used lots of paint... I'll have to put a high price on this one, given how much paint I'm going through already! (I hope it turns out!)
Posted by noricum at 11:53 PM No comments:

Well, I didn't actually manage to make it into the garden this weekend, so instead here are some photos of what I accomplished previously: 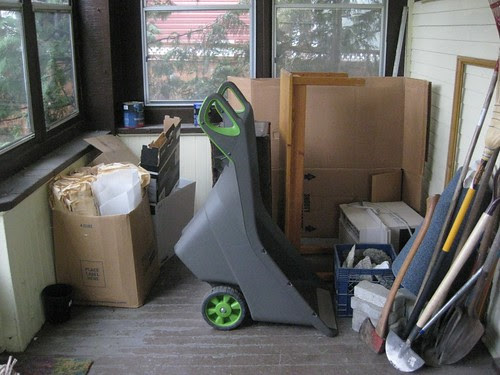 Okay, technically this wasn't in the garden, but it is progress. I'm not sure if I posted the mess it was before, but it is indeed a vast improvement. More of the crap boxes will be going in recycling, but I had filled the bin last week, and so needed to wait until this week before putting more in. (Which I haven't done yet, but I have until Tuesday night.) 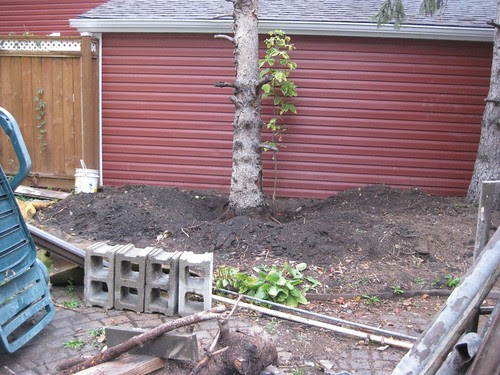 Yeah, I posted about this before, but I feel this shows how much dirt I threw around last weekend.

One thing I did accomplish this weekend: 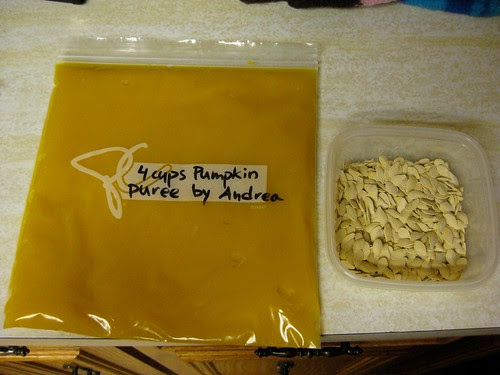 I converted two small pumpkins into four cups of puree for my grandma to use for pie, plus pumpkin seeds for me (I was going to share with co-workers, but there aren't many left after snacking tonight), and pumpkin skin and glop for the compost pile! :) I also made an impressive mess... thank goodness for dishwashers! (There's a few handwash items I need to do, but the kitchen is mostly back to normal.)

Although Saturday was a perfect day for being in the garden (cool, sunny, not winter), I spent the daylight hours running around shopping, and getting stuck in football traffic. (Whoops... note to self: check schedule before planning to be anywhere near the stadium!) However, I did buy some gardening tools I need, plus a replacement light fixture for outside the back door (the old one died... not sure if it's the motion sensor or timer, but it died).

Next weekend is a retreat, so no gardening then either. I've got my fingers crossed that winter keeps holding off!!! (Perhaps things will slow down a bit at work, and I can used some banked time for a gardening day.)

I'm making progress inside too. Not as fast as I'd like, but I'm only one person. (I have to keep reminding myself of that!)
Posted by noricum at 12:01 AM No comments:

Me vs. The Dead Tree 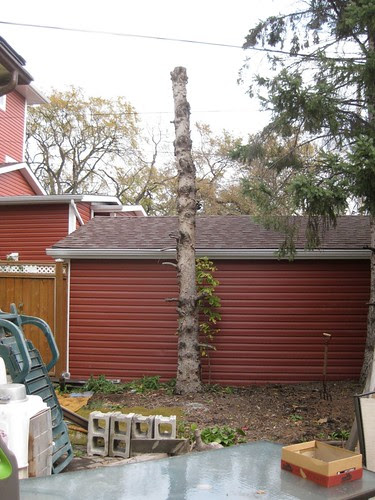 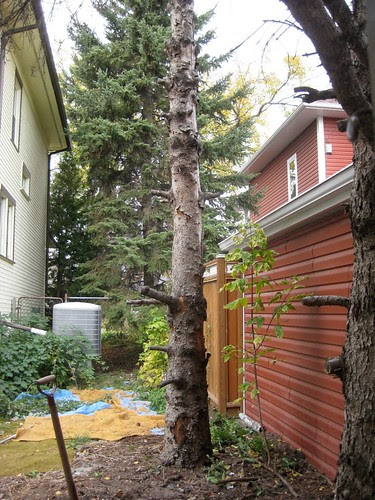 1. Gather tools. (Gloves, garden fork, axe, hoe, lawn edger, loppers, shovel, bag of small gardening tools, rake, broom.) Now, I didn't expect to necessarily need all of those, but I gathered everything I had (plus the axe and loppers which I had borrowed the other week from my mom) so that I wouldn't have to go fetch something, which would put me in danger of getting distracted by another task that needs doing.

2. Pull weeds that were coming up again in the area. Luckily they were far from having seed heads (not even flower buds), so I added them to my compost pile... "greens" to mix with the "browns" (leaves)! Yay!

3. Expose roots. Looking at my array of tools, I decided to start with the hoe. Normally the fork is my favourite digging tool, but it would just get bent whenever I ran into a root. I ended up using the hoe very much like an adze... the ground was so solid, the chopping motion would give me some purchase, and then I'd pull the loosened chunk towards me. My hoe is awesome. I bought it for one or two dollars at an estate sale, and it is *solid*, and has all the right angles! 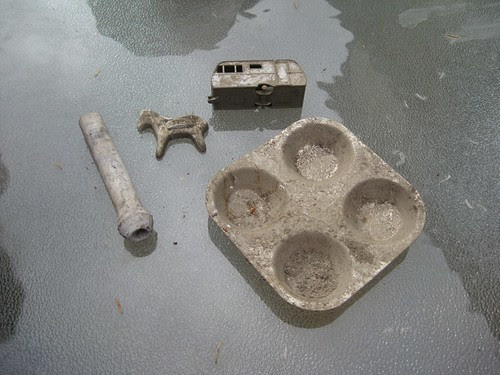 5. Take breaks as needed. Sometimes I just stopped for some water, sometimes I did a different task... like rake and sweep the area around the trash cans and back gate, where leaves and pine needles had accumulated. All pretty again: 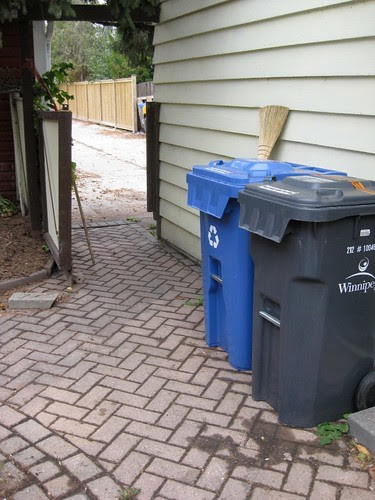 Or rake up the leaves that were accumulating where my property meets the back lane: 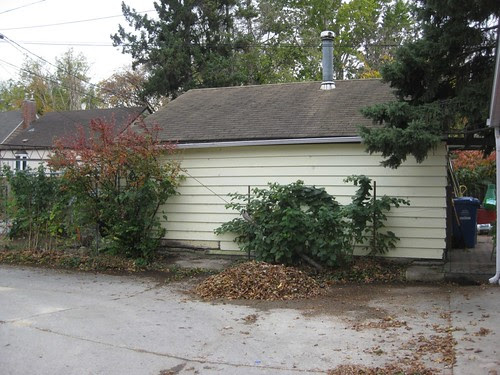 My leaf pile is growing: 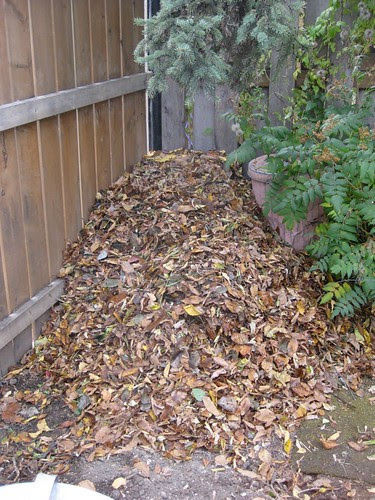 6. Chop smaller roots that are making it difficult to expose the big roots. (I didn't want to chop the supporting roots until I knew I could finish the job, since I didn't want it to fall over when I wasn't there.)

By the time I had to stop, this is where I got to: 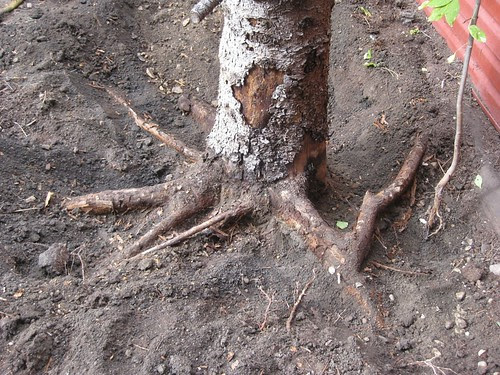 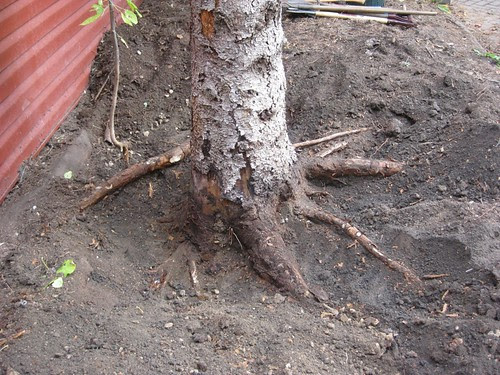 At this point, I'd like to say something: "Ow."

Monday is a holiday (Canadian Thanksgiving), but they're forecasting rain, so I probably won't be able to continue this until next weekend. Given how much I ache, I'm not complaining that much.

I bought a come-along on the way to my dad's for dinner, in case the tree is still stubborn even after I start chopping its roots.

To do:
1. Chop through roots.
2. Pull tree over.
3. Dig soil (mix organics into clay, remove roots from dead tree, but try not to disturb roots from living tree).
4. Plant perennials.

Snow, please hold off for a while longer! (Especially since I have other gardens to tend to as well!) *sigh*
Posted by noricum at 1:56 AM No comments:

I raked the lawn today. I will probably need to rake again next weekend, since the leaves haven't finished falling... however, since it was snowing horizontally two days this week, I figured I had better rake before the snow starts sticking!

I slept late today... and even after I woke up, I didn't want to *get* up, what with the radio saying it was 1 C outside. (And not terribly warm inside... I've turned the heat on, but not very high.) It was much nicer under the covers. However, eventually I did get up, get dressed, and started working in the yard.

Today I did a pretty good job at remembering both before and after photos. 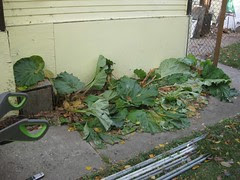 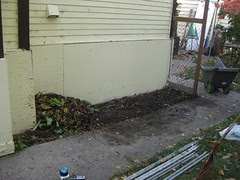 "Greens" for my compost bin: 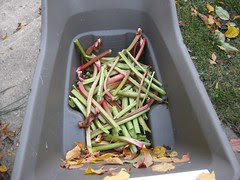 Southerners, who have to pay money for rhubarb in the grocery store, might be rather shocked at me composting all that rhubarb... but this patch apparently doesn't produce very good rhubarb (I'm not a fan of cooked rhubarb, and I haven't eaten raw rhubarb since I was a kid, for some reason... I guess I got out of the habit), and a bunch of it was going mushy anyway.

In the first photo, there's a box. I had assumed it was insulating something. I was curious what it was insulating, so I tipped it over. I discovered that there was nothing inside (despite it having insulation on the inside), plus it completely fell apart (it had been sitting there for around 30 years, I think), so I put it with dad's junk to be hauled away.

Rhubarb leaves are poisonous (oxalic acid). People seem to be split on whether rhubarb leaves can be composted if the compost will be used in a vegetable garden. Since it was looking like I'd fill up my composter anyway, I decided to leave the leaves in a pile here in the rhubarb patch to compost (already decomposing leaves raked on top)... I figure it's safe to use rhubarb leaf compost on the rhubarb patch. ;)

The day lily is still blooming, although it's looking a bit cold: 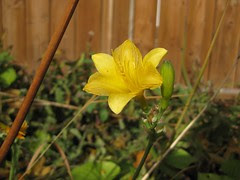 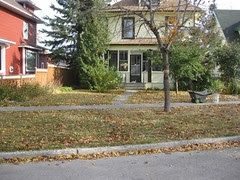 As you can see, the sour cherry hasn't realized it's fall yet, and is still holding on to its leaves. The elms have lost some but not all of their leaves. The little tree on the boulevard is pretty bare now, though.

Random thought: American friends? Do you call the strip of grass between the sidewalk and the road a "boulevard" too? (Given that it comes from French, I'm wondering if maybe you don't...)

Given how fresh leaves like to fall and/or blow in, I took "after" shots whenever I finished a section, just to prove that it looked reasonably good at one point. ;) 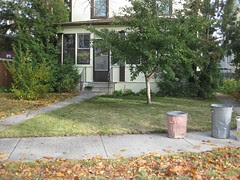 This section filled up the rest of my composter. 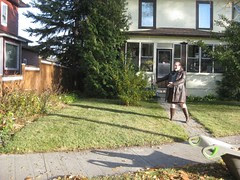 This section filled up the pink trash can, plus more that I just dumped in a heap in the back. (I'm using the other two trash cans for yard waste that I don't want in my compost.) My friend "Vanna" here stopped by for a visit... I multi-tasked, though, and raked while I visited. (Too much to do before the snow flies!) 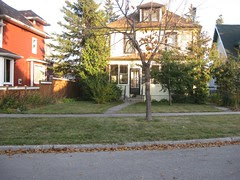 This produced another two wheelbarrows full that just got dumped on the heap in the back.

It's a small yard, and it wasn't even that full of leaves... and yet I *still* have a huge pile out back!

Back yard patch of grass, before: 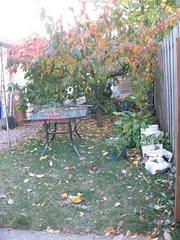 (The plum tree also still needs to lose most of its leaves.) 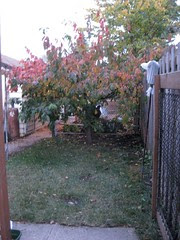 I just discovered that Flickr decided to default to small photos today. I'm too lazy to go back and fix all the photos I've already copied & pasted code for... so if you want to see a bigger view, click through to Flickr.

My big pile of leaves: 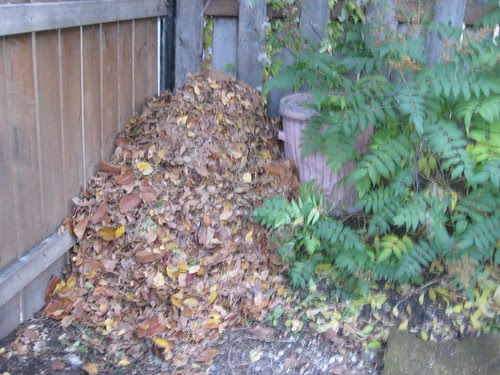 (Yes, the photo is blurry. It was getting dark by then, and I don't like to use the flash, so use longer exposure times instead. I didn't notice that the photo was like that until I uploaded to my computer, by which point it was too dark to retake the photo.)

I also rearranged some stuff on the patio, and swept some spots. Here's a "before" shot (well, mostly before, I moved some stuff before this shot): 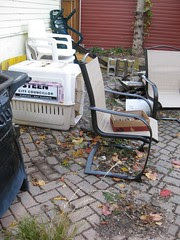 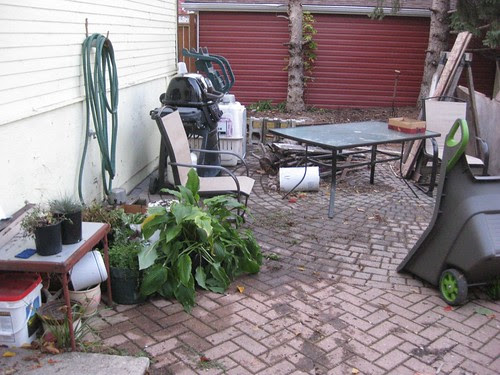 I still need to get rid of a lot of dad's junk, but things are improving.

Oh, I drained the hose in this photo too.

Of course, I *meant* to get farther than this... I wanted to at least *start* on bringing down the dead tree, and planting the perennials sitting in pots... *sigh*
Posted by noricum at 1:12 AM No comments:

The "front" back gate now has a hook and eye to hold it open: 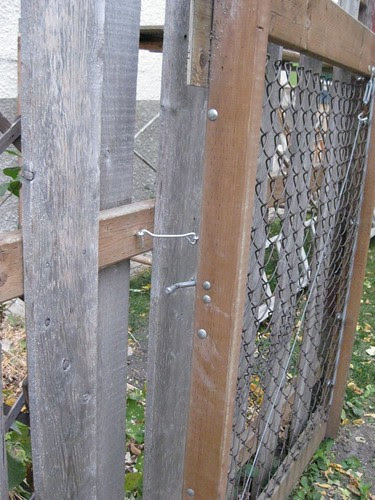 Posted by noricum at 9:52 PM No comments: